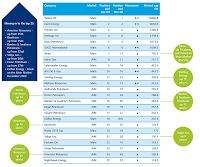 A report into activities of UK upstream independent companies published by consulting firm Deloitte this morning makes-up for quite interesting reading. Its ranking of 25 leading independents has the usual suspects – Tullow Oil and Cairn Energy atop, as first and second. However, movements elsewhere in the table narrate a story of their own.

Desire Petroleum Plc, Borders & Southern Petroleum Plc and Rockhopper Exploration Plc rose in market value rankings for London-listed independent production companies as they hold exploration rights near the Falkland Islands. According to the report, Desire, which started exploratory drilling in Falkland Island Waters for the first time since 1998, rose by 10 places to 14th place, Borders & Southern rose 17 places to break into the top 25 at 15th and Rockhopper Exploration Plc rose 23 places to 26 – just outside the top 25.

Argentina and UK went to war over the Falkland Islands in 1982 after the former invaded. UK forces wrested back control of the islands, held by it since 1833, after a week long war that killed 649 Argentine and 255 British service personnel. The Islands have always be a bone of contention between the two countries. The prospect of oil in the region has renewed diplomatic spats with the Argentines complaining to the UN and launching fresh claims of sovereignty.

UK has rejected the claims on the basis of the right of self-government of the people of the Islands "underpinned by the principle of self-determination as set out in the UN charter". Market commentators feel the fresh round of diplomatic salvos are as much about oil as they are about politics. A widely held belief that fresh conflict was highly unlikely could precipitate in independent operators in the region being taken over by oil majors.

Ian Sperling-Tyler, co-head of oil and gas corporate finance at Deloitte, raised some very important points while doing his press rounds. In separate interviews with Bloomberg and CNBC Europe, he opined that the wider market would have to wait and see what effect political risk will have on activity levels in the Falklands. However, he thinks it is highly plausible that operators in the Falklands were not big enough to monetise those assets on their own.

Hence, they could very well be acquired by a bigger company. And well the independents are growing bigger by the month too. The top two in the league table - Tullow Oil, which is developing reserves in Uganda, and Cairn Energy, which focuses on India, accounted for 60% of the market capitalisation of the top 25 companies for 2009, the report shows (click on image).

As for the diplomatic row between the two nations; it’s nothing more than a bit of argy-bargy with an oily dimension and is highly likely to stay there. Meanwhile, the BBC reports that Spanish oil giant Repsol might be about to join the exploration party from the Argentinean side.