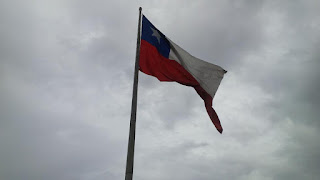 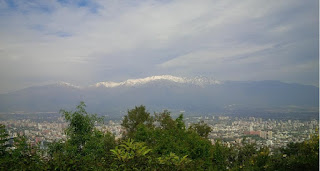 Curious case of the Pisco Sour 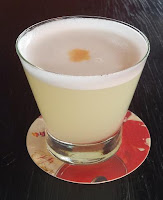 Following a weekend in Lima, the Oilholic has crossed over to Santiago de Chile. However, before one gets down to commodities related matters, there is the not so little matter of ‘not settling’ where the splendid regional cocktail Pisco Sour originates, a subject of much disquiet between Peru and Chile.

But first the recipe – you’ll need 25ml Lemon Juice, one egg white, 50ml Pisco (either Chilean or Peruvian), 20ml simple syrup. Give it an almighty shake with ice cubes, pour from shaker and add a dash of bitters. The end result is that delicious stuff in the photo on the left. That dear readers is the national drink of both Peru and Chile!

The origin of the main liquor base – Pisco, a colourless to yellow amber grape brandy made from distilling grape wine into a high proof spirit (below right) – is hotly contested. First known production dates back to the 16th century. Peruvians claim the name and first production site originates from the town of Pisco, while the Chileans claim the word “pisco”, a derivative of a term for a common bird, was used all along the Pacific Coastline of South America since the early days of Spanish settlers. 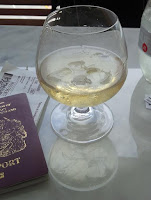 Going one step further, should names of towns matter, the Chileans renamed the town of La Unión in 1936 as Pisco Elqui so as to reinforce their claims over the name Pisco. Chile’s Pisco production volume dwarfs Peru’s by a ratio of 10 bottles to one. However, on the international stage Peruvians have the bragging rights as the “finer pisco” (at least in their opinion) is exported 3.5 times more than the Chilean produce.

There was dismay in Santiago, when Lima won a significant battle by being recognised as the original home of Pisco by the European Union in 2013. Yet, Chile’s usage of the word Pisco to describe its brandy cannot be curtailed, given its commonality. So much so for the liquor, but the tussle doesn’t end here! The cocktail is just as hotly disputed. According to bartenders in Lima’s Larcomar area, the cocktail originated in the city and was invented by an American named Victor Morris in the 1920s.

When Morris, who had been living in Peru since 1903, opened Morris' Bar in Lima, the cocktail became his specialty. However, the recipe underwent several changes until Mario Bruiget, a Peruvian employee of Morris, added Angostura bitters and egg whites to the mix, thus creating the cocktail mix that has stood the test of time since 1926. 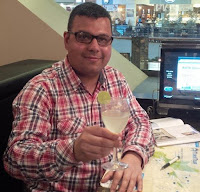 However, in Santiago de Chile, the story is widely dismissed. On the contrary, bartenders in the Chilean capital’s Providencia area say it was an English sailor Elliot Stubb who came up with the idea in 1872. Stubb, they say, mixed Key lime juice, syrup, and ice cubes to create the cocktail well known in Chile, some 50 years before the modern Peruvian version was even around.

Rubbish, no proof – retort the Peruvians again, while adding that the Chileans pinched the idea when Morris advertised the drink in 1924 in a local newspaper in the port of Valparaíso, Chile. Guess that doesn’t settle this one then. All the Oilholic can say is – whether sipped in Peru or Chile – it’s a splendid beverage! Cheers! That’s all for the moment folks! Keep reading, keep it ‘crude’!