Last Friday, the Brent forward month futures price plummeted to US$110.65 per barrel thereby losing all of the gains it made in 2013. The WTI price declined in near furious tandem to US$91.92; the  benchmark's lowest intraday price since January 4. An Italian political stalemate and US spending cuts enforced by Congressional gridlock have unleashed the bearish trends. Quite frankly, the troublesome headwinds aren’t going anywhere, anytime soon.

Prior to the onset of recent bearish trends, Bank of America said the upper limit for Brent crude will rise from US$140 per barrel this year to US$175 in 2017 because of constraints on supply. It added that WTI may slip to “US$50 within the next two years” amid booming North American supply. Meanwhile, ratings agency Moody’s expects strong global crude prices in the near term and beyond, with a continued US$15 per barrel premium in favour of Brent versus WTI over 2013.

Moody's still assumes that Brent crude will sell for an average US$100 per barrel in 2013, US$95 in 2014, and US$90 in the medium term, beyond 2014. For WTI, the agency leaves its previous assumptions unchanged at US$85 in 2013, 2014 and thereafter. Away from the fickle pricing melee, there was a noteworthy development last month in terms of Brent’s liquidity profile as a benchmark, which is set to be boosted.

On February 19, Platts proposed the introduction of a quality premium for Ekofisk and Oseberg crudes; two of the four grades constituting the Dated Brent marker. A spokesperson said the move would increase transparency and trading volumes in Dated Brent. The proposal came a mere fortnight after Shell’s adjustments to its trading contract for three North Sea blends including Brent.

The oil major said it would change its contract (SUKO 90) for buying and selling to introduce a premium for the delivery of higher quality Brent, Ekofisk and Oseberg grades. Previously, it only used the Forties grade which was typically the cheapest Brent blend and thus used to price the benchmark by default. BP has also agreed to Shell’s amended pricing proposals in principle.

The Oilholic thinks it is prudent to note that even though Platts is the primary provider of price information for North Sea crude(s), actual contracts such as Shell’s SUKO 90 are the industry’s own model. So in more ways than one, a broad alignment of the thinking of both parties (and BP) is a positive development. Platts is requesting industry feedback on the move by March 10 with changes being incorporated with effect from shipments in May.

However, there are some subtle differences. While Shell has proposed an inclusion of Brent, Platts is only suggesting premiums for Oseberg and Ekofisk grades. According to published information, the oil major, with BP’s approval, has proposed a 25% premium for Brent and Oseberg based on their difference to the Forties differential, and a 50% premium for Ekofisk.

But Platts, is seeking feedback on recommending a flat 50% premium for both Oseberg and Ekofisk. Nonetheless, at a time of a dip in North Sea production, a change of pricing status quo aimed at boosting liquidity ought to be welcomed. Furthermore, there is evidence of activity picking up in the UK sector of the North Sea, with Oil and Gas UK (OGUK), a body representing over 320 operators in the area, suggesting last month that investment was at a 30-year high.

OGUK said companies invested £11.4 billion in 2012 towards North Sea prospection and the figure is expected to rise to £13 billion this year. It credited UK Chancellor George Osborne’s new tax relief measures announced last year, which allowed gas fields in shallow waters to be exempt from a 32% tax on the first £500 million of income, as a key factor.

However, OGUK warned that reserves currently coming onstream have not been fully replaced with new discoveries. That is hardly surprising! In fact, UK production fell to the equivalent of 1.55 million barrels per day (bpd) in 2012, down by 14% from 2011 and 30% from 2010. While there may still be 24 billion barrels of oil to be found in the North Sea, the glory days are not coming back. Barrel burnt per barrel extracted or if you prefer Petropounds spent for prospection are only going to rise.

From the North Sea’s future, to the future of a North Sea operator – Canada’s Nexen – the acquisition of which by China’s state-owned CNOOC was finally approved on February 26. It took seven long months for the US$15.1 billion takeover to reach fruition pending regulatory approval in several jurisdictions, not least in Canada.

It was announced that shareholders of the Calgary, Alberta-based Nexen would get US$27.50 in cash for each share, but the conditions imposed by Canadian (and US) regulators for the deal to win approval were not disclosed. More importantly, the Harper administration said that CNOOC-Nexen was the last deal of its kind that the Canadian government would approve.

So it is doubtful that a state-controlled oil company would be taking another majority stake in the oil sands any time soon. The Nexen acquisition makes CNOOC a key operator in the North Sea, along with holdings in the Gulf of Mexico and West Africa, Middle East and of course Canada's Long Lake oil sands project (and others) in Alberta.

Meanwhile, Moody’s said the Aa3 ratings and stable outlooks of CNOOC Ltd and CNOOC Group will remain unchanged after the acquisition of Nexen. The agency would also continue to review for upgrade the Baa3 senior unsecured rating and Ba1 subordinated debt rating of Nexen. 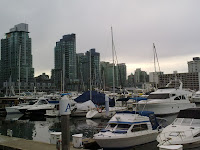 Moving away from Nexen but sticking with the region, the country’s Canadian Business magazine asks, “Is Vancouver the new Calgary?”  (Er…we’re not talking about changing weather patterns here). The answer, in 'crude' terms, is a firm “Yes.” The Oilholic has been pondering over this for a good few years. This humble blogger’s research between 2010 and present day, both in Calgary and Vancouver, has always indicated a growing oil & gas sector presence in BC.

However, what is really astonishing is the pace of it all. Between the time that the Oilholic mulled about the issue last year and February 2013, Canadian Business journalist Blair McBride writes that five new oil & gas firms are already in Vancouver. Reliable anecdotal evidence from across the US border in general, and the great state of Texas in particular, suggests more are on their way! Chevron is a dead certain, ExxonMobil is likely to follow.

One thing is for certain, they’re going to need a lot more direct flights soon between Vancouver International and Houston’s George Bush Intercontinental airport other than the solitary Continental Airlines route. Hello, anyone from Air Canada reading this post?

Continuing with corporate news, Shell has announced the suspension of its offshore drilling programme in the Arctic for the rest of 2013 in order to give it time to “ensure the readiness of equipment and people.” It was widely expected that prospection in the Chukchi and Beaufort Seas off Alaska would be paused while the US Department of Justice is looking into safety failures.

Shell first obtained licences in 2005 to explore the Arctic Ocean off the Alaskan coastline. Since then, £3 billion has been spent with two exploratory wells completed during the short summer drilling season last year. However, it does not mask the fact that the initiative has been beset with problems including a recent fire on a rig.

Meanwhile, Repsol has announced the sale of its LNG assets for a total of US$6.7 billion to Shell. The deal includes Repsol’s minority stakes in Atlantic LNG (Trinidad & Tobago), Peru LNG and Bahia de Bizkaia Electricidad (BBE), as well as the LNG sale contracts and time charters with their associated loans and debt. It’s a positive for Repsol’s credit rating and Shell’s gas reserves.

As BP’s trial over the Gulf of Mexico oil spill began last month, Moody’s said the considerable financial uncertainty will continue to weigh on the company’s credit profile until the size of the ultimate potential financial liabilities arising from the April 2010 spill is known.

Away from the trial, the agency expects BP's cash flows to strengthen from 2014 onwards as the company begins to reap benefits of the large roster of upstream projects that it is working on, many of which are based in high-margin regions. “This would help strengthen the group's credit metrics relative to their weaker positioning expected in 2013,” Moody’s notes.

One final bit of corporate news, Vitol – the world's largest oil trading company –  has posted a 2% rise in its 2012 revenue to US$303 billion even though volumes traded fell and profit margins remained under pressure for much of the year. While not placing too much importance on the number, it must be noted that a US$300 billion-plus revenue is more than what Chevron managed and a first for the trading company.

However, it is more than safe to assume Chevron’s profits would be considerably higher than Vitol’s. Regrettably, other than relying on borderline gossip, the Oilholic cannot conduct a comparison via published sources. That’s because unlike listed oil majors like Chevron, private trading houses like Vitol don’t release their profit figures.

That’s all for the moment folks. But on a closing note, this blogger would like to flag-up research by the UK’s Nottingham Trent University which suggests that Libya could generate approximately five times the amount of energy from solar power than it currently produces in crude oil!

The university’s School of Architecture, Design and the Built Environment found that if the North African country – which is estimated to be 88% desert terrain – used 0.1% of its landmass to harness solar power, it could produce almost 7 million crude oil barrels worth of energy every day. Currently, Libya produces around 1.41 million bpd. Food for thought indeed! Keep reading, keep it ‘crude’!