On oil price direction and EMF 2019 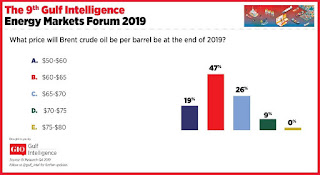 And on everyone's mind - unsurprisingly - was the direction of the oil price. This blogger has maintained the market is stuck in the modest middle, given that even 58% of Saudi capacity being temporarily knocked offline last month was not enough to keep Brent futures above $70 per barrel for a sustained period of time.

Demand concerns have returned with a vengeance to temper risk driven upticks. The Oilholic remains in the $65 per barrel Brent average bracket. But majority of the delegates to the Forum were even more bearish for the quarter, based on the findings of an instant poll conducted at Gulf Intelligence's behest by yours truly (see image top left, click to enlarge). Many are bracing for a Q4 2019 Brent price in the range of $60-$65 per barrel. 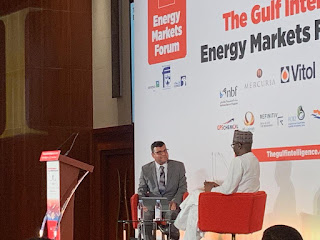 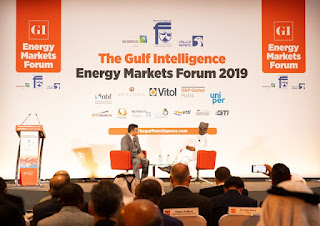 As part of the proceedings, one also got a chance to interview Mele Kyari, Group Managing Director of the Nigerian National Petroleum Corporation (NNPC), both to discuss the spot poll's findings, as well as how Nigeria views the current market dynamic.


Kyari stressed that Nigeria expects global demand to continue at pace driven by petrochemicals and aviation fuel. Tied into that is of course NNPC's own, and much-needed push to both invest, as well as court investment in its downstream sector.

And away from the main auditorium, were several informative industry roundtables. Fujairah itself is undergoing significant changes in light of current geopolitics, inward investment, and the likes of ADNOC and Saudi Aramco mulling trading and storage outposts there. Will be penning thoughts on that subject for Forbes and Rigzone shortly, but that's all from Fujairah for the moment folks. Keep reading, keep it 'crude'!

Addendum I - 06.10.19: Thoughts via Forbes - ADNOC Gets Serious About Its Oil Exports Bypassing Strait Of Hormuz Via Fujairah, here.
Addendum II - 07.10.19: And via Rigzone - Oil Hub of Fujairah Thriving Amid Rising Geopolitical Risk, here. 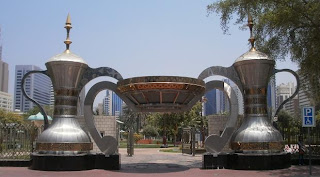 Petroleum economists are wondering if we have crossed a gateway to crude chaos? The magnificent one pictured (left) here in Abu Dhabi's Capital Garden is certainly no metaphor for the situation. Egypt is burning, Libya is protesting and US/UK/NATO are threatening [almost direct] action against Syria.

Add the US Federal Reserve's current stance on QE to the geopolitical mix and you get a bullish Brent price. Yes, yes, that's all very predictable. But when bulls run amok, all attention usually turns to Aramco's response. It is a well known fact that the Saudis like the crude oil price to remain within what economists prefer to describe as the "middle" ground. (You want your principal export to be priced high enough to keep you ticking, but not so high as to drive importers towards either consuming less or seeking alternatives).

Investment house Jadwa's research often puts such a Saudi comfort zone in US$80-90 per barrel price range. The Oilholic has been banging on about the same range too, though towards the conservative lower end (in the region of $78-80). The Emiratis would also be pretty happy with that too; it's a price range most here say they’ve based their budget on as well.

A scheduled (or "ordinary") OPEC meeting is not due until December and in any case the Saudis care precious little about the cartel's quota. Hints about Saudi sentiment only emerge when one gets to nab oil minister Ali Al-Naimi and that too if he actually wants to say a thing or two. As both Saudi Arabia and UAE have spare capacity, suspicions about a joint move on working towards a "price band" have lurked around since the turn of 1990s and Gulf War I.

Aramco's response to spikes and dives in the past, for instance the highs and lows of 2007-08 and a spike during the Libyan crisis, bears testimony to the so called middle approach. Recent empirical evidence suggests that if the Brent price spikes above $120 per barrel, Aramco usually raises its output to cool the market.

Conversely, if it falls rapidly (or is perceived to be heading below three digits), Aramco stunts output to prop-up the price. The current one is a high-ish price band. Smart money would be on ADNOC and Aramco raising their output, however much the Iranians and Venezuelans squeal. For the record, this blogger feels it is prudent to mention that Aramco denies it has any such price band.

In a statement, the agency said, oil rich Abu Dhabi has a strong sovereign balance sheet, both in absolute terms and compared to most 'AA' category peers. To put things into perspective, its sovereign external debt at end of Q4 2012 was just 1% of GDP, compared to Fitch's estimate of sovereign foreign assets of 153% of GDP. Only Kuwait has a stronger sovereign net foreign asset position within the GCC.

With estimated current account surpluses of around double digits forecast each year, sovereign net foreign assets of Abu Dhabi are forecast to rise further by end-2015. Fitch also estimates that the fiscal surplus, including ADNOC dividends and ADIA investment income, returned to double digits in 2012 and will remain of this order of magnitude for each year to 2015.

Furthermore, non-oil growth in the Emirate accelerated to 7.7%. This parameter also compares favourably to other regional oil-rich peers. Help provided by Abu Dhabi to other Emirates is likely to be discretionary. Overall, Fitch notes that Abu Dhabi has the highest GDP per capita of any Fitch-rated sovereign.

However, the Abu Dhabi economy is still highly dependent on oil, which accounted for around 90% of fiscal and external revenues and around half of GDP in 2012. As proven reserves are large, this blogger is not alone in thinking that there should be no immediate concerns for Abu Dhabi. Furthermore, Fitch's conjecture is based on the supposition of a Brent price in the region of $105 per barrel this year and $100 in 2014. No concerns there either!

Just a couple of footnotes before bidding farewell to Abu Dhabi – first off, and following on from what the Oilholic blogged about earlier, The National columnist Ebrahim Hashem eloquently explains here why UAE's reserves are so attractive for IOCs. The same newspaper also noted on Friday that regional/GCC inflation is here to stay and that the MENA region is going to face a North-South divide akin to the EU. The troubled "NA" bit is likely to rely on the resource rich "ME" bit.

Inflation certainly hasn’t dampened the UAE auto market for sure – one of the first to see the latest models arrive in town. To this effect, the Oilholic gives you two quirky glimpses of some choice autos on the streets of Abu Dhabi. The first (pictured above left) is the latest glammed-up Mini Cooper model outside National Bank of Abu Dhabi's offices, the second is proof that an Emirati sandstorm can make the prettiest automobile look rather off colour.

Finally, a Bloomberg report noting that Oil-rich Norway had gone from a European leader to laggard in terms of consumer spending made yours truly chuckle. Maybe they should reduce the monstrous price of their beer, water and food, which the Oilholic found to his cost in Oslo recently. That's all from Abu Dhabi, its time to bid the Emirate good-bye for destination Oman! Keep reading, keep it 'crude'!