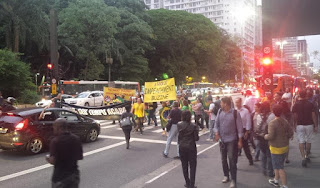 EIA’s switch to Brent is telling

A decision by the US Energy Information Administration (EIA) this month has sent a lot of analysts and industry observers, including yours truly, crudely quipping “we told you so.” That decision is ditching the WTI and adopting Brent as its benchmark for oil forecasts as the EIA feels its domestic benchmark no longer reflects accurate oil prices.

Ok it didn't say so as such; but here is an in verbatim quote of what it did say: "This change was made to better reflect the price refineries pay for imported light, sweet crude oil and takes into account the divergence of WTI prices from those of globally traded benchmark crudes such as Brent."

Brent has traded at US$20 per barrel premium to WTI futures since October, and the premium has remained in double digits for huge chunks of the last four fiscal quarters while waterborne crudes such as the Louisiana Light Sweet have tracked Brent more closely.

In fact, the EIA clearly noted that WTI futures prices have lagged behind other benchmarks, as rising oil production in North Dakota and Texas pulled it away from benchmark cousins across the pond and north of the US border. The production rise, for lack of a better word, has quite simply 'overwhelmed' the pipelines and ancillary infrastructure needed to move the crude stuff from Cushing (Oklahoma), where the WTI benchmark price is set, to the Gulf of Mexico. This is gradually changing but not fast enough for the EIA.

The Oilholic feels it is prudent to mention that Brent is not trouble free either. Production in the British sector of the North Sea has been declining since the late 1990s to be honest. However the EIA, while acknowledging that Brent has its issues too, clearly feels retail prices for petrol, diesel and other distillates follow Brent more closely than WTI.

The move is a more than tacit acknowledgement that Brent is more reflective of global supply and demand permutations than its Texan cousin. The EIA’s move, telling as it is, should please the ICE the most. Its COO said as early as May 2010 that Brent was winning the battle of the indices. In the year to November, traders have piled on ICE Brent futures volumes which are up 12% in the year to date.

Furthermore, prior to the OPEC output decision in Vienna this week, both anecdotal and empirical evidence suggests hedge funds and 17 London-based money managers have increased their bets on Brent oil prices rising for much of November and early December. Can’t say for last week as yours truly has been away from London, however, as of November 27 the net long positions had risen to 108,112 contracts; a spike of 11k-plus.

You are welcome to draw your own conclusions. No one is suggesting any connection with what may or may not take place in Vienna on December 12 or EIA opting to use Brent for its forecasts. Perhaps such moves by money managers and hedge funds are just part of a switch from WTI to Brent ahead of the January re-balancing act. However, it is worth mentioning in the scheme of things.

In other noteworthy news, Stephen Harper’s government in Canada has finally approved the acquisition of Nexen by China’s CNOOC following a review which began on July 23. Calgary, Alberta-headquartered Nexen had 900 million barrels of oil equivalent net proven reserves (92% of which is oil with nearly 50% of the assets developed) at its last update on December 31, 2011. The company has strategic holdings in the North Sea, so the decision does have implications for the UK as well.

CNOOC’s bid raised pretty fierce emotions in Canada; a country which by and large welcomes foreign direct investment. It has also been largely welcoming of Asian national oil companies from India to South Korea. The Oilholic feels the Harper administration’s decision is a win for the pragmatists in Ottawa. In light of the announcement, ratings agency Moody's has said it will review Nexen's Baa3 senior unsecured rating and Ba1 subordinated rating for a possible upgrade.

Meanwhile, minor pandemonium has broken out in Brazil’s legislative circles as president Dilma Rousseff vetoed part of a domestic law that was aimed at sharing oil royalties across the country's 26 states. Brazil’s education ministry felt 100% of the profits from new ultradeepwater oil concessions should be used to improve education throughout the country.

But Rio de Janeiro governor Sergio Cabral, who gets a windfall from offshore prospection, warned the measure to spread oil wealth across the country could bankrupt his state ahead of the 2014 soccer world cup and the 2016 summer Olympic games. So Rousseff favoured the latter and vetoed a part of the legislation which would have affected existing oil concessions. To please those advocating a more even spread of oil wealth in Brazil, she retained a clause spreading wealth from the “yet-to-be-explored oilfields” which are still to be auctioned.

Brazil's main oil-producing states have threatened legal action. It is a very complex situation and a new structure for distributing royalties has to be in place by January 2013 in order for auctions of fresh explorations blocks to go ahead. This story has some way to go before it ends and the end won’t be pretty for some. Keep reading, keep it 'crude'!