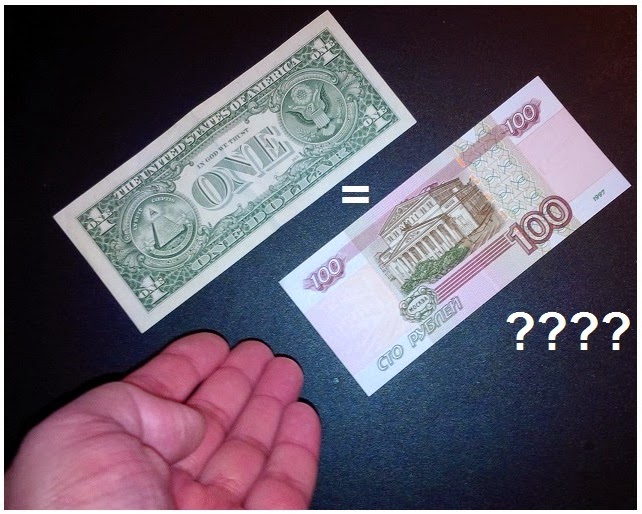 The Oilholic is feeling somewhat melancholy today! A crisp rouble note yours truly kept as a memento following a visit to Moscow in June is now worth considerably less when pitted against one’s lucky dollar!

At one stage over the past 24 hours, the US$1 banknote on the left was worth 79% of the RUB100 note on the right. One doubts whether a dollar would fetch a 100 roubles - but just putting it out there.

Barring a brief jump when the Russian government went for a free float of the currency back in November, there hasn’t been much to be positive about the rouble. Last evening’s whopper of an announcement by the Central Bank of Russia to raise interest rates by 650 basis points to 17% from 10.5% did little more than provide temporary respite.

Since January till date, Russia has spent has spent over $70 billion (and counting) in support of the rouble. Yet, the currency continues to feel the strain of escalating sanctions imposed by the West in tandem with a falling oil price.

However, there is a very important distinction to be made here. A falling oil price does not necessarily imply that Russian oil companies are in immediate trouble, repeat ‘immediate’ trouble. While a weak rouble makes imports costlier for the wider economy, which will almost certainly tip into a recession next year; oil – priced and exported in dollars - will get more ‘domestic’ bang for the converted bucks.

The Russian Treasury also adjusts tax and ancillary levies on oil exports in line with a falling (or rising) oil price. The policy is likely to keep things on a sound footing for the country’s oil & gas companies, including state-owned behemoths, for at least another 12 months.

How things unfold beyond that is anybody’s guess. First off, several Russian oil & gas players would need their next round of refinancing late next year or early on in 2016. With several international debt markets off limits owing to Western sanctions, the state will have to step in at least partially.

Secondly, the oil price is unlikely to stage a recovery before the summer, and would be nowhere near $100 per barrel. If it is still below $85 come June, as the Oilholic thinks it would be and the rouble does not recover, then corporate profits would take a plastering regardless of however much the Russian Treasury adjusts its tax takings.

Of course, not all in trouble would be Russian. Austrian, French and German banks with exposure to the country, accompanied by Russia-centric ETFs and Arctic oil & gas exploration will be hit hard.

Oil majors with exposure to Russia are already taking a hit. In particular, BP springs to mind. However, as the Oilholic opined in a Forbes article earlier this year - while BP could well do without problems in Russia, the company can indeed cope. For Total and Exxon Mobil, the financial irritants that their respective Russian forays have become of late would not be of major concern either.

Taking a macro viewpoint, market chatter about a repetition of the 1998 crisis is just that – chatter! Never say ‘never’ but a Russian default is highly unlikely.

Kit Juckes, global head of forex at Société Générale, says, “Comparisons with past crises – and 1998 in particular – are inevitable. The differences are more important than the similarities. Firstly, emerging market central banks (including and especially Russia) have vastly larger currency reserves with which to defend their currencies.

“Secondly, US real Fed Funds are negative now, where they had risen sharply from 1994 onwards. That's a double-edged sword as merely the thought of Fed tightening has been enough to spark a crisis after such a long period of zero rates, but when the dust settles, global investors will still need better yields than are on offer on developed market bonds.”

The final difference, Juckes says, is that the rouble, in particular, is falling from a very great height in real terms. “It has only fallen below the pre-1998 peak in the last few days. It's still not cheap unless we believe that the gains in the last 16 years are all justified by productivity – an argument that works for some emerging market economies rather more than it does for Russia.," he concludes.

Finally, there is no disguising one pertinent fact in the entire ongoing Russian melee – the manifestly obvious lack of economic diversification with the country. Russia has remained stubbornly reliant on oil & gas exports and its attempts to diversify the economy seem even feebler than Middle Eastern sheikdoms of late.

For this blogger, the lone voice of reason within Russia has been former Finance Minister Alexei Kudrin. As early as 2012, Kudrin repeatedly warned of impending trouble and overreliance on oil & gas exports. Few Kremlin insiders listened then, but now many probably wish they had! That’s all for the moment folks! Keep reading, keep it ‘crude’! 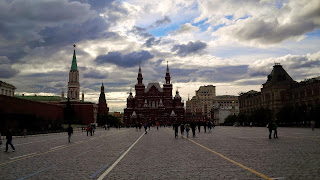 Both crude oil benchmarks are more or less staying within their ranges seen in recent weeks. That would be US$80-85 per barrel for Brent and $76-80 per barrel for WTI. ‘Short’ is still the call.

While Russia is coping with the current oil price decline, the country’s treasury is clearly not enjoying it. However, given the wider scenario in wake of Western sanctions, the Russian rouble’s decline actually provides momentary respite on the ‘crude’ front and its subsequent free float some much needed positivity.

The currency’s fall this year against the US dollar exasperated as sanctions began to bite. While that increases the bill for imports, Russian oil producers (and exporters) actually benefit from it. There is a very important domestic factor in the oil exporters’ favour – the effective tax rate paid by them as oil prices decline falls in line with the price itself, and vice versa. While a declining rouble hurts other parts of the economy reliant on imports, it partially helps offset weaker oil prices for producers.

According to calculations by Fitch Ratings, if the rouble stabilises near about its current level and the oil prices hold steady around $85 per barrel next year, an average Russian producer should report 2015 rouble operating profits broadly in line with 2013, when oil prices averaged $109.

“In this scenario Russian oil companies' financial leverage may edge up, especially for those producers that relied most heavily on international finance, because their hard currency-denominated debts will rise in value. Given that Fitch-rated oil companies, such as LUKOIL, GazpromNeft and Tatneft, all have relatively low leverage for their current ratings, this should not trigger rating actions,” says Dmitry Marinchenko, an Associate Director at the ratings agency.

The primary worry for Russia at the moment would be a decline in prices below $85 (as is the case at the moment) which would certainly hurt profits, as would a sudden recovery for the rouble while oil prices continue to tumble. Fitch reckons most Russian oil companies have solid liquidity and would comfortably survive without new borrowing for at least the next couple of years.

“However, they may need to reconsider their financing model should access to international debt markets remain blocked for a long time, because of sanctions and overall uncertainty over the Ukrainian crisis. Nevertheless, their fundamentals remain strong, and we expect them to maintain flat oil production and generate stable cash flows for at least the next three to four years, even with lower oil prices,” Marinchenko adds.

There is one caveat though. All market commentary in this regard, including Fitch’s aforementioned calculation, is based on the assumption that the Kremlin won’t alter the existing tax framework in an attempt to increase oil revenue takings. Anecdotal evidence the Oilholic has doesn’t point to anything of the sort. In fact, most Russian analysts this blogger knows expect broader taxation parameters to remain the same.

If deliberations over the summer at the 21st World Petroleum Congress in Moscow were anything to go by, the country was actually attempting to make its tax regime even more competitive. A lot has happened since then, not just in terms of the oil price decline but also with relation to the intensification of sanctions. Perhaps with near coincidental symmetry, both the rouble and oil prices have plummeted by 30% since the first quarter of this year, though the free float attempt has helped the currency.

The Oilholic feels the Kremlin is inclined to leave more cash with oil companies in a bid to prop up production. With none of the major producers blinking (as one noted in a recent Forbes column), the Russians didn’t either pumping over 10 million barrels per day in September. That’s their highest production level since the collapse of the Soviet Union.

For the moment, the Central Bank of Russia has moved to widen the rouble's exchange-rate corridor and limit its daily interventions to a maximum of $350 million. This followed last week's 150 basis points increase in its benchmark interest rate to 9.5%. The central bank’s idea is to ease short-term pressure on dollar reserves and counteract the negative fiscal impact of lower oil prices. Given the situation is pretty fluid and there are other factors to be taken into account, let’s see how all of this plays over the first quarter of 2015.

Meanwhile, the Russians aren’t the only ones grappling with geopolitics and domestic political impediments. We’re in the season of silly politics in wider Europe as well. The European Union’s efforts to wean itself of Russian gas remain more about bravado than any actual achievement in this regard. As one blogged earlier, getting a real-terms cut in Russian imports to the EU over the next decade is not going to be easy.

Furthermore, energy policy in several jurisdictions is all over the place from nuclear energy bans to shale exploration moratoriums, or in the UK’s case a daft proposal for an energy price freeze by the leader of the opposition Labour party Ed Miliband to counter his unpopularity. All of this at a time when Europe will need to invest US$2.2 trillion in electricity infrastructure alone by 2035, according to Colette Lewiner, an industry veteran and energy sector advisor to the Chairman of Capgemini.

“Short of nationalisation where the state would bear the brunt of gas market volatility, a price freeze would not work. In order to mitigate effects of the freeze, companies could cut infrastructural investment which the UK can ill afford or they’ll raise revenue by other means including above average prices rises ahead of a freeze,” she told this blogger in a Forbes interview. 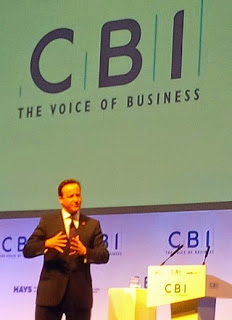 No wonder UK Prime Minister David Cameron is concerned as Miliband's proposal has the potential to derail much needed investment. In a speech to the 2014 CBI annual conference (see right) that was heavy on infrastructure investment and the country’s ongoing tussle with EU rules, Cameron did take time out to remind the audience about keeping the climate conducive for inward investment, especially foreign direct investment, in the UK’s energy sector.

“To keep encouraging inward investment, you need consistency and predictability. That is particularly important in energy,” he said to an audience that seemed to agree.

Investment towards infrastructure and promoting a better investment climate usually goes down well with the business lobby group. However, in the current confusing climate with barely six months to go before the Brits go to the polls, keeping the wider market calm when an opponent with barmy policies, could potentially unseat you is not easy.

The Oilholic feels the PM’s pain, but is resigned to acceptance of the country’s silly election season, and yet sillier policy ideas. That’s all for the moment folks! Keep reading, keep it ‘crude’!