Being careful of what Hedge Funds wish for

So it is that OPEC has moved its ministers meeting, and the OPEC/non-OPEC from April 17/18 to June 25/26, but the Oilholic decided to come to the Austrian capital anyway given that other 'crude' meetings could not be moved, and because Vienna is lovely in the spring anyway!

While spring might be in the air in Vienna, a bit of craziness has surfaced in the Oil market trading sphere. Yet again, no sooner has Brent crossed $70, chatter of three-figure crude prices is again rearing its head. Here's the Oilholic warning from very recent history (via Forbes); and why caution is merited.

There is nothing on the horizon to be overtly bullish about the oil market – bearish variables (i.e. China, President Donald Trump's trade salvos, Brexit, German slowdown and changing consumption patterns haven't materially moved yet) and bullish quips based on geopolitics (i.e. Libya, Venezuela and Nigeria) matter but are being countered partially, if not wholly, with sentiment around rising US production.

Replicating a favourite pastime of the inimitable former Saudi Oil Minister Ali Al-Naimi, on this sunny day in Vienna - I could think of nothing better than a brisk walk down the city's Ring Road from the Intercontinental to Rathaus, before the flight home : ) pic.twitter.com/xyEn9IQd9F
— Gaurav Sharma (@The_Oilholic) April 19, 2019

Few in Vienna, think an oil price spike is on the cards, having had three days of deliberations over, let's face it more than three friendly beers. That sentiment is echoed by both heavy sour and light sweet physical traders the Oilholic has spoken to in Shanghai and Rotterdam.

Not many believe OPEC wants three-figure prices; and even if they do, more light sweet American crude is hitting the market heading to Asia. Yours truly has long maintained that we are stuck in a boring oscillation between $60-80 per barrel prices; a predictability that hedge funds find boring for very different monetary reasons. Let's leave it at that!

As for OPEC, it is not going to move until Trump decides on if and what kind/level of waivers he is going to grant importers of Iranian crude or not. That and balancing Russia’s concerns are probably the primary reasons behind postponing its ministers' meeting. That's that from Vienna until June.

Interspersed between crude meetings, the Oilholic also found time for a mooch about Vienna's Ring Road on a sunny afternoon, starting from the Intercontinental Hotel to the Rathaus up to Karlskirche; partially replicating the past-time of Ali Al-Naimi, the inimitable former Saudi Oil Minister. Keep reading, keep it ‘crude’! 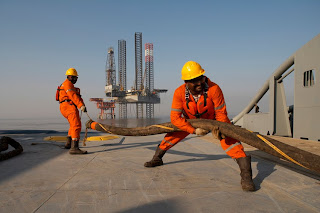