Santos hopes to give peace a chance in Colombia 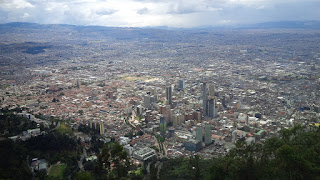 After a fascinating two weeks travelling around South America, the Oilholic is back where the journey on the continent started in Bogota, Colombia, before heading back to London.

In using the Colombian capital (seen on the left from Mt. Monserrate) as a starting point, this blogger wanted to both feel first hand as well as write about how far this country has come following five decades of armed conflict resulting in a tragic human and socioeconomic cost, above all else. More so, as peace is finally getting a chance in 2015.

In September, President Juan Manuel Santos inked a preliminary agreement with the Revolutionary Armed Forces of Colombia (or FARC). After three prolonged attempts since the 1980s by successive Colombian governments to broker peace, the recent accord appears to be the best chance for achieving that objective.

Despite being the first president in decades to have an upper hand on FARC thanks largely to a heavy military build-up under his predecessor Alvaro Uribe, Santos staked his presidency on finding a solution to end the violence through peaceful means, though not at any cost.

Reaching an agreement depended on FARC doing jail time, as demanded by the court of public opinion so heavily traumatised by violence perpetrated by the rebels over the years on a daily basis. On that front there is some dissatisfaction with the proposed deal.

While the finer points are still to be worked out over the next six months, the Santos administration and FARC have broadly agreed that foot soldiers of the militant outfit would receive amnesty, but its leaders charged with “serious crimes” will face a special tribunal that would include foreign judges alongside Colombian ones.

Those FARC operatives who cooperate and confess to their crimes would receive lighter penalties including five to eight years of community service with restriction on movement, but not prison time in the strictest sense. However, those who do not cooperate could go to jail for up to 20 years.

A judicial framework along similar lines would be applied to right-wing paramilitary forces and their supporters. In return, FARC, which still has over 6,000 combatants, has also agreed that the rules will only apply if they give up their weapons.

The significance of the deal cannot be overstated even if public demand for stricter penalties on FARC is not being met. From M-19 to the still active ELN, Colombians have seen too much death and destruction, and the dark side of human conflict that no one needs to see.

Among the many expressions by Colombian artists summing up the tragedy of conflict within the country's borders, the Oilholic was privileged to see the late Alejandro Obregón’s Muerte a la bestia humana (Death to human beast) on display at the National Museum of Colombia in Downtown Bogota. 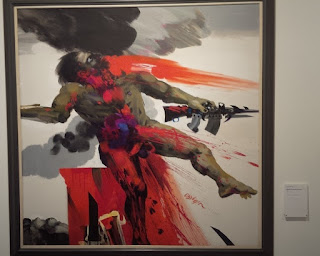 Friends here in Colombian capital say the painting (see right) was Obregón’s expression of disgust at those responsible for the kidnapping and gruesome murder of Gloria Lara de Echeverri, a government official abducted in June 23, 1982.

Her body was found five months later on the steps of a church. While a FARC faction was alleged to have been behind the act, the case was never fully resolved and remains a source of debate to this day. For Obregón and his peers in the art community, Gloria Lara, like several of her countrymen and women were innocent victims who deserved better but lasting peace, bar the odd ineffective ceasefire aside, could not be brokered.

So if an imperfect deal now offers a chance for peace, then it needs to be looked at. FARC knows its back is against the wall and has as much of a vested interest in making the deal work as the Santos administration. Things are changing in Colombia. While every life is precious, and 600 Colombians civilians were lost to conflict last year, 2015 has so far been the year to see the fewest deaths to armed conflict since 1985, according to local data.

While there is petty crime and gun violence in Bogota, it is no longer the kidnapping capital of the world, like it was back in the 1980s. Beleaguered FARC’s ire has been directed more towards near daily attacks on Colombian infrastructure, mainly power lines and oil pipelines.

One recent attack resulted in 15,000 barrels of crude spewing into a river. April saw heated exchanges of fire between government forces and FARC. However, while talks were progressing the skirmishes diminished in frequency and ferocity.

It now remains to be seen, if the agreement holds, and Santos has said the Colombian people will have their say on the final agreement. The visible human tragedy aside, disruption caused by conflict lowers the country’s GDP by 15% to 20% per annum according to some estimates. It appears a chance to change that is on the horizon. Here's hoping it holds. That’s all from Bogota for the moment folks! Keep reading, keep it ‘crude’!