The Oilholic had to leave OPEC HQ prior to the conclusion of a rather fractious OPEC+ meeting which resulted in no agreement being reached among OPEC and its non-OPEC partners. Following are the key takeaways, from Vienna Airport:

More considered viewpoints/analysis to follow once yours truly has arrived in Houston. Keep reading, keep it ‘crude’!

Overnight (March 5) OPEC ministers met and proposed a deepening of existing oil production cuts by 1.5 million barrels per day (bpd) to their Russia-led OPEC+ partners in an effort to calm the oil market following the coronavirus outbreak and its devastating impact on the global economy.

While the original 'deepening of cuts' proposal was set to last until end-June 2020, OPEC heavyweights met yet again late yesterday evening and announced the proposal would be extended to the end of 2020.

The burden of 1.5 million bpd, would be shared as 1 million bpd and 0.5 million bpd between OPEC and non-OPEC players respectively. From a headline perspective, if approved the market would be looking at 3.2 million bpd of OPEC+ barrels being taken out of the global supply pool.

With that the ball went into the Russian court, and that's where it has been since well into today (March 6). In that time, Russian Oil Minister Alexander Novak has gone and returned from Moscow, and an OPEC+ closed-door meeting scheduled to start at 9:30 CET, has yet to get going 14:20 CET!

And the Oilholic has putting his scenarios to colleagues in the broadcast media.

It was a pleasure rounding off #OPEC commentary on @CGTNEurope's Global Business broadcast with @AP TV crew. Thanks for having me on the program. Q1, Q2 looking pretty uncertain for the #oil market #OOTT #oilandgas pic.twitter.com/qIAJ2QQ6qm
— Gaurav Sharma (@The_Oilholic) March 5, 2020

In one scenario, Russia could say 'nyet' and you'd see bearish headwinds engulf oil futures and driving the price down to $30 per barrel.

In another scenario, the mammoth cut would proceed providing only temporary relief to oil prices given the full extent of the coronavirus' demand destruction is yet to be clear. Although, Wall Street is belatedly, finally coming to terms with the magnitude of the destruction having ditched its complacency.

Finally, often the favourite colour at these OPEC meetings based on the Oilholic's past experience is grey. OPEC+ could emerge and offer a good old fashioned figures fudge involving OPEC cuts with the support of the Russians, and other non-OPEC players, with very few barrels to show for it. This too will either provide negligible or short-lived support.

All of this bottles down to one thing - hardly anyone has an accurate handle on where oil demand is going, and the Oilholic believes there will be shrinkage on an annualised basis. Were that to be the case, a 'crude' logic applies - oil supply cuts never really solve a crisis of demand. It's where crude market presently is. OPEC can improve its odds via a cut but can do little more!

And on that note its time to leave Vienna for London, and then on to Houston, all the while keeping an eye on events here. But that's all for the moment folks. Keep reading, keep it 'crude'! 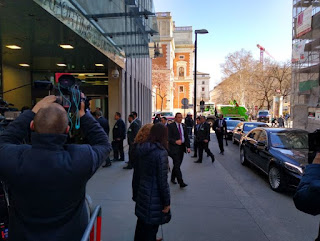 After a meeting that went long into the night, OPEC+ is in for another hectic few days of haggling as it works out how to respond to the demand slump being caused by the coronavirus outbreak.

OPEC+ technical committee's recommendation was for an expansion of its ongoing cuts of 1.2 million barrels per day (bpd) by 600,000 bpd.

But before the evening was done last night, a number as high as 1-1.2million bpd was being touted around, something that has held firm for much of this (Mar 5) morning and afternoon. Quite frankly, events have overtaken OPEC and demand forecasters are shooting blind at the moment, as the Oilholic noted via Forbes at IPWeek.

But given the global proportions of the coronavirus spread, potential for $30 per barrel prices and demand growth shrinkage, Wall Street is finally waking up to the magnitude of the demand destruction that could happen. Here's yours truly's latest Forbes take on the subject.

Lets see how the day unfolds. But for a deepening of that magnitude Saudi Arabia's headline production will have to drop below ~9 million bpd; and should that happen it'll be a bit of whopper facilitated by Saudi Crown Prince and Powerbroker-in-chief Mohammed Bin Salman! Keep reading, keep it 'crude'!

Crude arrival in Vienna in the age of Coronavirus

The Oilholic has arrived in Vienna for the 178th 'Extraordinary' meeting of OPEC Ministers, only to be told that analysts and journalists will not be allowed into the Secretariat to mitigate chances of the spread of the coronavirus.

It seems the conference and its goings-on would be 'live streamed', and all of us would be moved to the confines of a meeting room at the Palais Hansen Kempinski with no media briefings and contact with oil ministers. Still old friends and diehards have turned for some outdoor coffee and cookies outside OPEC HQ.

More diehards outside #OPEC HQ this afternoon than the number of people on my flight in to Vienna from London yesterday afternoon! pic.twitter.com/SI1ZtIFutp
— Gaurav Sharma (@The_Oilholic) March 4, 2020

No handshakes at #OPEC with @eithnetreanor in the age of the #CoronavirusOubtreak; we settled on a 'crude' but friendly elbow nudge :) #OOTT #oilandgas pic.twitter.com/hgO2mAEf9h
— Gaurav Sharma (@The_Oilholic) March 4, 2020

And here's the agenda for the next few days:

That's all for the moment folks! More from Vienna soon; but in the interim, keep reading, keep it 'crude'!