Getting a glimpse of the Tifosi at Monza 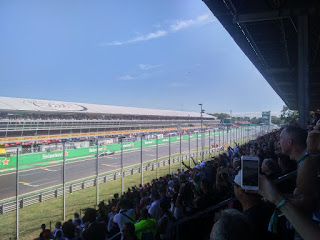 After a gap of nearly seven years, the Oilholic belatedly headed to a Formula 1 race-track in Monza, Italy, on September 2-3, to witness firsthand the changes that are afoot in the world of motor racing’s premier rung.

But first, a word on Monza itself – that place of pilgrimage for F1 racing enthusiasts, the home grand of Ferrari and of course their exuberant ‘tifosi’ or the fans. 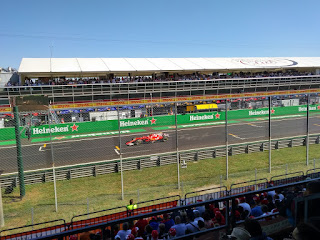 Inaugurated in 1922, the race track is the oldest in F1 and ranks alongside Monaco and Silverstone, UK as the three must-see races on the annual calendar for purists.

Of course, it has undergone several modifications in its nearly 100-year history. The current circuit’s length is around 3.6 miles, with the race being 53 laps.

So in this historic setting, the Oilholic saw a rain-soaked qualifying on Saturday, and gloriously sunny race on Sunday. 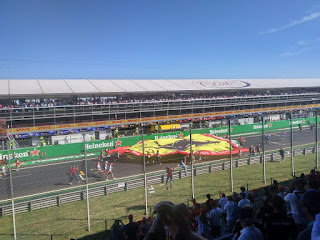 Regrettably for the neutral and indeed this blogger, a Ferrari did not win as four-time World Champion Sebastian Vettel could only manage a third-placed finish. Rather, the Mercedes driven by Lewis Hamilton carried the day.

Of course, that didn’t stop the tifosi from partying like there’s no tomorrow and rushing on to the track post-finish as they usually do year in, year out. As for the cars themselves, this blogger won’t be the first to catalogue this but they no longer sound like the old ones.

Back in 2010 – last time yours truly was in the stands – the circuit ran the 2.4-litre V8 cars – the sort of engine you could hear miles away from the race tracks. But in the 2014 season, under in a bid to appear environmentally friends, F1 went with the smaller less polluting 1.6-litre turbo hybrid V6 engine.

It’s noise level just isn’t that great, if that’s your thing – rather decidedly underwhelming. So it’s best to forget the V10s and V12s; the Oilholic doubts they are come back. That’s all from Monza folks! Forza Ferrari! Keep reading, keep it crude!

Addendum 17.09.2017: For a more detailed report on the ever changing world of F1, here is the Oilholic’s take in a column for Forbes.