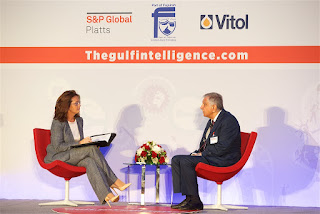 The Oilholic was delighted to be back in Fujairah, UAE once again to moderate sessions and participate in the deliberations at Gulf Intelligence’s Energy Markets Forum 2017 on 18-19 September.

This year’s event was enhanced further with the introduction of the New Silk Road CEOs of the year awards in four key energy categories. Eelco Hoekstra, CEO of Royal Vopak - the largest international oil storage terminal operator in China, Singapore and Fujairah – won the award in the ‘storage’ category, while Ibrahim Al-Buanain, CEO of the wholly-owned trading unit of Saudi Aramco was recognised in the field of ‘Trading’.

Bakheet Al-Rashidi, CEO of Kuwait Petroleum International, received the accolade for ‘Refining’, and Capt. Mousa Morad, General Manager of the Port of Fujairah, bagged the award for the advancement of ‘Ports’ on the New Silk Road.

On the morning of the forum, after the gala evening before, Iraqi Oil Minister Jabbar Al Luiebi sent headline writers into overdrive by opining that perhaps an OPEC production cut extension could be on the cards when the cartel next meets on 30 November, and that the cuts might well be deepened. He also dismissed criticism that Iraq was the ‘bad boy’ of OPEC that's constantly overproducing crude oil. Here’s the Oilholic’s more detailed take on the Minister's stance for Forbes.

Away from the Iraqi crude envoy's quip, delegates at the forum were largely in agreement that the oil price would average in the $50s per barrel range bracket in 2018. The EMF 2017 spot survey of 250 energy professionals revealed 61% felt the $50s range was about par. 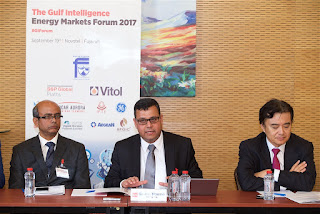 The relatively bullish sentiment is of course supported by the International Energy Agency’s (IEA) forecast that global oil demand growth in 2018 will average 1.4 million barrels per day (bpd).

More so, 71% of survey respondents polled felt that OPEC should continue its supply cut agreement when it expires at the end of the first quarter of 2018, although doubts were expressed in several quarters about OPEC’s exit strategy, since a stronger oil price also benefits US shale players.

The Oilholic was also delighted to moderate two satellite sessions at EMF 2017. The first panel discussion centred on petrochemicals and what would be the top five strategies for the Gulf to align with Asia’s competitive appetite.

Among the panellists were the inimitable Dr. Sun Xiansheng, Secretary General of International Energy Forum, a regular on ‘crude’ speaking circuits, flanked by Ernest Rubondo, Executive Director of the Petroleum Authority of Uganda and Hetain Mistry, Managing Analyst (petrochemicals) at S&P Global Platts. 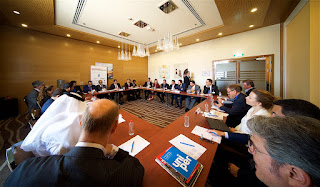 The second panel discussion involved a lively discussion on the Fourth Industrial Revolution or Industry 4.0 and what disruptive technologies the energy industry, particularly downstream, needs to take note of.

Both sessions made for a fascinating afternoon of crude thoughts – with the dominant theme of the former panel discussion being China’s appetite for being the harbinger of things to come in the petrochemical landscape, and the dominant theme of the latter panel being divergent views on the actual pace of digitisation in the global energy industry in general and the Middle East in particular.

All in all, another fantastic few days of deliberations at an event that continues to grow bigger by the year, thanks to the efforts of the wonderful team at Gulf Intelligence. And that’s all from Fujairah folks! Next stop Dubai, before the journey back home to London. Keep reading, keep it crude!