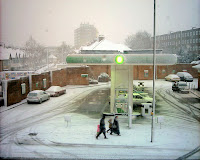 As some of the heaviest snowfall in history blanketed most of the UK and shows no sign of abating, traders with positions on Brent Crude Oil Futures in London would surely be in the mood for one of Dean Martin’s most famous songs.

On the back of the cold weather, ICE Brent crude oil contract for February delivery was trading at a 14-month high of $80.55 a barrel on the London-based ICE Futures Europe exchange earlier today; the highest this part of the world has seen since October 9, 2008.
Furthermore, it seems the chill and snow is likely to prevail across the British Isles, Scandinavia, much of Europe and parts Eastern United States and East Asia as well for some time yet. Hence, the price spike is likely to go further. A quick call to a contact of mine at Sucden Financial revealed that February ICE Brent crude contract’s discount to the comparable front-month U.S. crude contract was at $1.25 per barrel.

Looking ahead, my contact who wasn’t humming Let it Snow till I put the jingle in his head, said the February versus March Brent spread was at 64 cents. On technicals front, Brent support is at $75 a barrel while resistance is at $82 a barrel. His overall assessment is that the market would more than take a +$80 settlement on the back of a temporary spike provided by the cold weather, given the current “uncertain and fragile” recovery of the global economy.
Most in the City echo the sentiment. Harry Tchilinguirian, head of commodities derivatives research at BNP Paribas, said in a TV interview that the weather has helped to give crude prices a boost. However, he felt the supply situation, especially in the U.S. was more than adequate. Separately, Mike Wittner, Head of oil market research at Société Générale, also expressed a similar opinion.

Both commentators feel that once the snow blasts have disappeared, after having added their couple of dollars worth to the crude price, corrections could be sharp. Nothing lasts forever, until then Let it Snow!