Arriving at the not so ‘Ordinary’ OPEC meeting 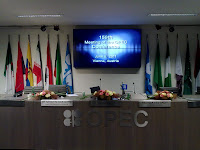 The Oilholic probably has to go back to Q1 2008 when an OPEC meeting last generated as much interest as the soon to be held 159th Ordinary meeting of the cartel here in Vienna. Interest of this magnitude usually gains traction when the cartel contemplates an alteration of production quotas. Initial signals are that come 1600 CET tomorrow, we could see a rise in the OPEC member nations’ quotas by 0.5 to 1.5 million b/d.
Such talk has intensified in the three weeks leading up to the meeting. OPEC’s May crude oil production report notes that the cartel’s total crude output was 28.99 million b/d. If Iraq, which is not subject to OPEC quotas at present, is excluded, then the production came in at 26.33 million b/d, or 1.5 million b/d higher than the quota of 24.8 million b/d as set in Q4 2008.

This begs the question, what would the increase be like in real terms – i.e. would it be an increase in paper targets (to which methinks not a lot of attention would or should be paid by the markets) or would it be an increase over the already existing, but not officially acknowledged physical production levels. If it is the latter, then that would be something and Société Générale's Mike Wittner reckons it would be a physical increment rather than a paper one.

Furthermore, in a note to clients, Wittner observes: “Before analysing what OPEC is thinking about, why it will probably increase quotas, and what the dangers are of doing so, it is very important to note the latest signal regarding the meeting. Early Monday evening (EST), it was reported that the Saudi-owned al-Hayat newspaper, based in London, quoted an unnamed source as saying that if OPEC decides to lift its output by more than 1 million b/d, Saudi Arabia’s production will reach about 10 million b/d during the summer period, when its domestic demand increases. This compares to around 8.9 - 9.0 million b/d in May, according to preliminary wire service estimates, with an increase of 0.2 - 0.3 million b/d expected in June, according to various sources."

The initial feelers here seem to be following the norm. The Saudis for instance, according to various media reports, would increase production anyway even if an increase is not announced. Approach of the others is more nuanced while some would suggest there are bigger factors at play rather than a straight cut decision on production.

Earlier today, following a meeting at 1600 CET, a ministerial monitoring sub-committee comprising of ministers from Algeria, Kuwait and Nigeria overseen by the OPEC secretariat proposed a 1 million b/d increment to the existing quotas. This could be a harbinger of what may follow tomorrow. However, few here expect anything other than stiff resistance to an increase in quotas by Iran and Venezuela.

Both countries have provided interesting sideshows. Iran's President Mahmoud Ahmadinejad sacked his oil minister and seized control of his ministry ahead of the meeting. He then appointed his close ally Mohammad Aliabadi as caretaker oil minister after parliament and Iran's constitutional watchdog said the president had no right to head the ministry.

Oilholic regrets that he knows little about the right honourable Aliabadi who has precious little experience of oily matters. Guess being greasily close to Ahmadinejad is a resume builder in that part of the world. Additionally, Venezuela is to complain about US sanctions on PDVSA.

Meanwhile, crude oil futures rose slightly either side of the pond following concerns that OPEC’s spare capacity will tighten pending on what happens tomorrow. OPEC had 5.94 million b/d in spare capacity in May, down 2.7 per cent from April, based on Bloomberg estimates. Spare capacity was 6.31 million barrels a day in March, the highest level since May 2009.

The official line from OPEC as of this evening is – “We’ll pump more if needs be.” But do we? Tracking arrivals of OPEC ministers in Austria one by one since 09:00 CET not one has said much about what may happen on this occasion. Based on past experience that is always a sign that something will happen.