Crude permutations of the Ukrainian stand-off 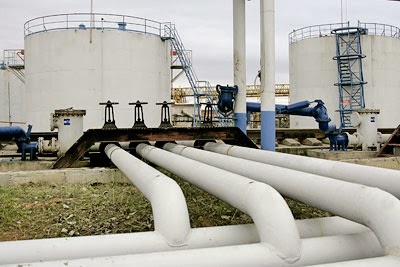 When the Russo-Georgian skirmish happened in 2008, European policymakers got a stark reminder of how reliant they were on Russian natural gas. Regardless of the geopolitics of that conflict, many leading voices in the European Union, especially in Germany, vowed to reduce their reliance on Russian gas.

The idea was to prevent one of the world's leading exporters of natural gas from using its resource as a bargaining tool should such an episode occur again. Now that it has, as the Ukrainian crisis brings Russia and West into yet another open confrontation, the Oilholic asks what happened to that vow. Not much given the scheme of things! What's worse, the Fukushima meltdown in Japan and a subsequent haphazard dismissal of the nuclear energy avenue by many European jurisdictions actually increased medium-term reliance on mostly Russian gas.

According to GlobalData, Russian gas exports to Europe grew to a record of 15.6 billion cubic feet per day last year. The US, which is not reliant on Russian natural resources, finds itself in a quandary as EU short-termism will almost certainly result in a toning down of a concerted response by the West against Russia in the shape of economic sanctions.

The human and socioeconomic cost of what's happening in Crimea and wider Ukraine is no laughing matter. However, President Vladimir Putin should be allowed a smirk or two at the idiocy and short-sightedness of the EU bigwigs – reliant on him for natural gas but warning him of repercussions! Therefore, sabre rattling by Brussels is bound to have negligible impact.

Meanwhile, Russia's Gazprom has said it will no longer offer Ukraine discounted gas prices because it is over US$1.5 billion in payment arrears which have been accumulating for over 12 months. Additionally, Rosneft could swoop for a Ukrainian refinery, according to some reports. While economic warfare has already begun, this blogger somehow does not see Russians and Ukrainians shooting at each other; Georgia was different.

Having visited both countries in the past, yours truly sees a deep familial and historic bond between the two nations; sadly that's also what makes the situation queasy. The markets are queasy too. Ukraine was hoping for a shale gas revolution and Crimea – currently in the Kremlin's grip – has its own shale bed. In November 2013, Chevron signed a $10 billion shale gas production sharing agreement with the Ukrainian government to develop the western Olesska field. Shell followed suit with a similar agreement.

Matthew Ingham, lead analyst covering North Sea and Western Europe Upstream at GlobalData, says shale gas production was inching closer. "Together with the UK and Poland, Ukraine could see production within the next three to four years."

However, what will happen from here is anyone's guess. A geopolitical bombshell has been dropped into the conundrum of exploratory and commercial risks.

Away from gas markets, the situation's impact on the wider crude oil market could work in many ways. First off, rather perversely, a mobilisation or an actual armed conflict is price positive for regional oil contracts, but not the wider market. A linear supply shortage dynamic applies here.

An economic tit-for-tat between Russia and the EU, accompanied by a conflict on its borders, would hurt wider economic confidence. So a prolonged escalation would be price negative for the Brent contract as economic activity takes a hit. Russia can withstand a dip in price by as much as $20 per barrel; but worries would surface should the $90-resistance be broken. To put things into perspective, around 85% Russia's oil is sold to EU buyers.

Finally, there is the issue of Ukraine as a major transit point for oil & gas, even though it is not a major producer of either. According to JP Morgan Commodities Research over 70% of Russia's oil & gas flow to Europe passes through Ukrainian territory. In short, all parties would take a hit and the risk premium, could just as well turn into a news sensitive risk discount.

Furthermore, in terms of market sentiment, this blogger notes that 90% of the time all of the risk priced and built into the forward month contract never really materialises. So this then begs the question, whose risk is it anyway? The guy at the end of a pipeline waiting for his crude cargo or the paper trader who actually hasn't ever known what a physical barrel is like!

The situation has also made drawing conclusions from ICE's latest Commitments of Traders report a tad meaningless for this week. Speculative long positions by hedge funds and other money managers that the Brent price will rise (in futures and options combined), outnumbered short positions by 139,921 lots in the week ended February 25, prior to the Ukrainian escalation.

For the record, that is the third weekly gain and the most since October 22. Net-long positions rose by 18,214 contracts, or 15%, from the previous period. ICE also said bearish positions by producers, merchants, processors and users of the North Sea crude outnumbered bullish wagers by 266,017 lots, rising 8.2% from the week before.

Away from Ukraine and on to supply diversity, Norway's Statoil has certainly bought cargo from a land far, far away. According to Reuters, Statoil bought 500,000 barrels of Colombian Vasconia medium crude, offered on the open market in February by Canada's Pacific Rubiales.

When a cargo of Columbian crude is sold by a Canadian company to Norwegian one, you get an idea of the global nature of the crude supply chain. That's if you ever needed reminding. The US remains Pacific Rubiales' largest market, but sources say it is increasing its sales to Europe.

Finally, in the humble opinion of yours truly, Vitol CEO Ian Taylor provided the soundbite of the International Petroleum Week held in London last month.

The boss of the world's largest independent oil trading firm headquartered in serene Geneva opined that Dated Brent ought to broaden its horizons as North Sea production declines. The benchmark, which currently includes Brent, Forties, Oseberg and Ekofisk blend crudes, was becoming "less effective" according to Taylor.

"We are extremely concerned about Brent already not becoming a very efficient or effective benchmark. It’s quite a concern when you see that production profile. Maybe the time has come to really broaden out Dated Brent," he said.

Broadening a benchmark that's used to price over half the world's crude could include Algeria's Saharan Blend, CPC Blend from the Caspian Sea, Nigeria's Bonny Light, Qua Iboe and Forcados crudes and North Sea grades DUC and Troll, the Vitol CEO suggested.

Taylor also said Iran wasn't going to be "solved anytime soon" and would stay just about where it is in terms of exports. The Oilholic couldn't agree more. That's all for the moment folks! Keep reading, keep it 'crude'!