A chat at Platts, ‘LHS’ & the Houston glut

The 'Houston glut debate' gained further traction this summer as the metropolitan area has been a recipient of rising inland crude oil supplies heading towards the US Gulf Coast. New light and heavy grades of crude are showing up – principally from the Eagle Ford, Permian Basin, North Dakota and Western Canada.

The ongoing American oil production boom complements existing Texas-wide E&P activity which is getting ever more efficient courtesy horizontal drilling. Yet, infrastructural impediments stunt the dispatch of crude eastwards from Texas to the refineries in Louisiana.

In fact, many analysts in Chicago and New York have long complained that Houston lacks a benchmark given it has the crude stuff in excess. It seems experts at global energy and petrochemical information provider Platts thought exactly the same.

Their response was the launch of the Platts Light Houston Sweet (or should we say ‘LHS’) in July. Nearly four months on, the Oilholic sat down with Platts Associate Editorial Director Sharmilpal Kaur to get her thoughts on the benchmark and more. So first off, why here and why now?

"We launched the new crude assessment this year as we felt it was finally time for a benchmark that reflected the local dynamic. I’d also say the US was ripe for a fresh benchmark and we went for one based on the price of physical crude oil basically FOB out of three major terminals in Houston."

Specifically, completion of the Kinder Morgan/Mercuria 210,000 barrels per day (bpd) rail terminal on the Houston Ship Channel could potentially provide another avenue for both WTI Midland and Domestic Sweet quality crudes to enter the Houston market.

The chances of Platts making a fist of LHS are good according to anecdotal evidence, especially as half of the supply side analyst community has been calling for such an assessment. The minimum volume considered by the information provider is 25,000 barrels, or 1,000 bpd rateable, in line with other US domestic pipeline grades.

Platts publishes LHS as a flat price; which is assessed using both fixed as well as floating price information. In the case of floating prices against WTI, Platts generally calculates the fixed price assessment using calendar month average (CMA) WTI or front-month WTI as the floating basis, depending on the WTI basis reported in bids, offers, and transactions.

In the case of light sweet price information reported against the Louisiana Light Sweet (LLS), Platts calculates the fixed price using LLS trade month. In the case of ICE Brent light sweet crude market, Platts calculates the resulting fixed price using an ICE Brent strip that reflects the value of ICE Brent for the relevant pipeline month. Additionally, in the absence of spot activity for light sweet crude in Houston, Platts will look at related markets such as WTI at Midland or WTI at Cushing and adjust its daily LHS assessment accordingly.

That absence won’t be all that frequent as the Houston crude oil distribution system looks set to receive new supplies of over 1.7 million bpd in terms of pipeline capacity delivering into the region by the end of June 2014. 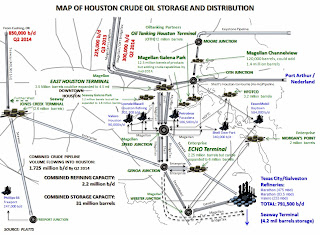 A regional trading market for producers and dispatchers selling the crude stuff to Gulf Coast refiners is well past infancy. Kaur reckons Houston’s spot trading market could rival those at Cushing, Oklahoma and St. James, Louisiana. (See Platts map illustrating the area’s crude oil storage and distribution projections on the right, click to enlarge).
So far so good, but in the ancillary infrastructure development and supply sources to Texas, does Kaur include Keystone XL at some point in the future?

"Yes, the pipeline extension will be built and despite the uptick in US crude oil production remains as relevant as ever. There are facets of Keystone XL which are hotly contested by those for and against the project – from its job creation potential to environmental concerns. My take is that Keystone XL would offer is incremental supply of heavy crude out of Canada that comes all the way down to the Gulf Coast and then gets blended."

"What’s produced domestically in the US (say in the Eagle Ford and Bakken) is light crude. What Gulf Coast refiners actually like are heavier crudes blended to form a middle blend. Canadian crude has started pushing out the Latin American crudes and the reason for that is pure pricing as Canadian crude is cheaper than Latin American crude. That trend is basically continuing…it’s why the pipeline extension was planned, and why every refiner in Houston will tell you its needed. President Barack Obama will get there once the legacy component of Keystone XL has been worked out."

As for the hypothesis that Canada may look elsewhere should the project not materialise, Kaur doesn’t quite see it that way. Simple reason is that the Americans know the Canadians and vice versa with very healthy trading relations between the two neighbours for better parts of a century.

"China as an export market is an option for Canada. It’s being explored vigorously by Canadian policymakers – but I see two impediments. Pulling a pipeline from Alberta to British Columbia in order to access the Chinese market via the West Coast won’t be easy. It will, as Keystone XL will, eventually get built, but not overnight. Secondly, the Chinese have diversified their importation sources more than any other country in the world – OPEC, Latin America, West Africa and Russia, to name a few."

Furthermore, US crude imports from West Africa are on the decline. That cargo has to go somewhere and industry evidence suggests its going to China, followed by Japan and to a much lesser extent India.
"The Indians would like to get their hands on Canadian crude too – no doubt about that; but logistics and cost of shipping complicates matters. A simple look at the world map would tell you that. Don’t get me wrong; China needs Canadian exports, but given the global supply dynamic Canada probably needs China more as a major export market."

In sync with what the ratings agencies are saying, Kaur sees also E&P capex going up over the next two to three years. "Most IOCs and NOCs see it that way. If you drove through exploration zones in the Bakken Shale, you’d be a busy man counting all the logos of oil & gas firms dotting the landscape, ditto for the Canadian oil sands where foreign direct investment is clearly visible."

The Platts expert flags up a fresh example – that of Hess Corporation which recently sold its US trading operations to Centrica-owned Direct Energy.

"Here is a company indicating quite clearly that it’s selling up the trading book and using that money to invest in Bakken wells as well as globally. Right now, in terms of E&P – the market is so lucrative, with an oil price level to sustain it, that people are making sure they find the capex for it and in many cases preferably from their balance sheets." The integrated model is not dead yet, but IOCs holding refineries on their balance sheet have clearly indicated that their priorities are elsewhere.

"You see ageing refineries in trouble within the OECD; at least 15 have faced problems in Europe owing to overcapacity. Yet China, India and Middle East continue to build new refineries – often out of need."

"China has indicated that it wants to be a regional exporter of refined products at some point. That’s a trading model it wants to adopt because it now has access to multiple crude oil supply sources. As a follow-up to its equity stakes in crude production sites, China now has ambitions and wherewithal of becoming a global refining power. In the Chinese government’s case – its need and ambition combined!"

The Oilholic and Kaur agreed that the chances of US crude oil ending up in the hands of foreign refiners, let alone Chinese ones, were slim to none for the moment. In the fullness of time, the US may actually realise it is in its own interest to export crude. Yet, given the politics it is still a question of 'if' and not an imminent 'when'.

Hypothetically, should the US employ free market principals and export its light crude which is surplus to its requirements, but get heavier crude in return more in sync with its refining prowess – the exchange would work wonders.

"It could command a better price for its light crude and actually buy the heavier crude cheaper. My thinking is that the US would actually come out on top and the rest of the world would benefit too. Here we have too much light crude, the rest of the world craves it – so there’s the opportunity in theory. In the unlikely event that this was to happen, we would see a very different supply dynamic. Price spikes associated with disruptions - for example as we saw during the Libyan conflict in 2011 - would be mitigated," says Kaur

Nonetheless, even with a ban on crude oil exports, the US oil & gas bonanza has weakened OPEC. There are two ways of approaching this – concept of incremental barrels on a virtual supply ledger and the constantly declining level of US imports.

"As US imports decline, barrels originally heading to these shores will be diverted elsewhere. That’s where the US has a voice when it speaks to OPEC. Supply side analysts such as you are tallying US, Russia and [OPEC heavyweight] Saudi Arabia’s production level. Now add Canada, prospects of a Mexican and Iraqi revival, a gradual Libyan uptick and some semblance of a resolution to the Iranian standoff – then there’s a lot of it around and OPEC understands it."

While Platts does not comment on the direction of the oil price, what Kaur sums up above is precisely why the Oilholic has constantly quipped over the course of 2013 that a three-figure Brent price is barmy and unreflective of supply side scenarios in an uncertain macroeconomic climate. Blame the blithering paper barrels!

"At least, you can take comfort from the fact that the peak oil theorists have temporarily disappeared. I haven’t seen one in Houston for while," Kaur laughs. In fact, the Oilholic hasn’t either – in Houston and beyond. That’s all for the moment from Platts' Houston hub! Keep reading, keep it ‘crude’!