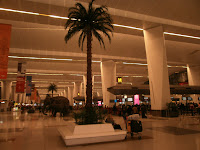 After a short trip to India, the Oilholic bids farewell to Delhi via its swanky impressive new terminal at Indira Gandhi International airport which the city's residents can be justifiably proud of. However, the financial performance of its national carrier – Air India – which is bleeding cash and could not possibly survive without government subsidy leaves a lot to be desired. Just as the Oilholic was checking in thankfully, for his British Airways flight home, news emerged that Air India had been denied jet fuel for almost four hours overnight on account of non-payment of bills.

Doubly embarrassing was the fact that those holding back fuel for the beleaguered national carrier were NOCs - Indian Oil, Bharat Petroleum and Hindustan Petroleum! Who can blame the trio, for Indian newspapers claimed that Air India owed in excess of INR 40 billion (US$812.8 million) in unpaid fuel bills.
So much so that in 2011 Indian NOCs put the airline on a “cash-and-carry” deal, requiring it to pay every time it refuelled its planes, rather than get a 90-day grace period usually given to airlines. Despite a merger with Indian Airlines in 2007, Air India continues to struggle even in a market as busy and vibrant as India where domestic, regional and international carriers are mushrooming (though not all of them successfully; just ask Kingfisher Airlines).
Away from Indian airports and airlines to crude matters, the US Eastern District Court of Louisiana issued a partial summary judgment on January 31, 2012 on BP’s indemnity obligations in wake of the Gulf of Mexico oil spill versus Halliburton’s liability. The summary states that BP must indemnify Halliburton for any third party claims related to pollution and contamination that did not arise from Halliburton's own actions. In addition, the indemnity is valid even if Halliburton is found to be grossly negligent, although the indemnity could be voided if Halliburton committed fraud. Ratings agency Moody's says the ruling is “modestly credit positive” for Halliburton and does not affect it its A2 rating with a stable outlook at this time.
Meanwhile, in an ongoing offshore spill in Nigeria, agency reports suggest that it may take Chevron around 100 days to drill a relief well at the site of a deadly blowout incident off the country’s soiled coastline last month. A Bloomberg report published in Business Week notes that another environmental catastrophe may be unfolding.
Continuing with the depressing subject of spills, Petrobras says that no more traces of oil were found in the sea during overflights carried out on Friday in the Carioca Nordeste spill site, in the Santos Basin. Therefore, in accordance with the procedures laid down in the country’s Emergency Plan, the contingency actions have been demobilised.
Petrobras says it will now only request approval to resume the Carioca Nordeste Extended Well Test after the investigation concerning the causes of the incident has been completed. The company emphasises that the rupture took place in the pipeline connecting the well to the platform. So no oil leaked at the well, which was closed automatically after the pipeline broke. As such, the incident did not take place in the pre-salt layer, which is nestled at a depth of over 2,000 meters under the seabed.
On a crude pricing note before flying home – while in India, the Oilholic notes that none of the main global equity indices have provided market direction as the weekend approaches and the Greek situation weighs heavily on investor sentiment. Amid crudely bearish trends, caution is the byword ahead of US employment data and the continuing Greek tragedy. The fact that both benchmarks - Brent and WTI - are resisting their current levels is down to the rhetoric by and on Iran. Thats all for the moment folks, keep reading, keep it ‘crude’!
© Gaurav Sharma 2012. Photo: Indira Gandhi International airport Terminal 3, Delhi, India © Gaurav Sharma 2012.
Posted by Gaurav Sharma at 2/03/2012 01:45:00 am No comments:

The Indian Oil Corporation Ltd (IOC) issued its much talked about bonds to the tune of US$500 million last week, with a 5.625% rate due in 2021 to fund ongoing and future domestic projects. Banking on the premise of burgeoning demand among other metrics, ratings agency Moody’s gave it a Baa3 rating with a stable outlook.
Through its 10 refineries with a combined capacity of 1.2 million barrels a day, IOC is India’s largest downstream company with a near 40% market share. While it is a publicly listed company, the Indian government owns 78.92% of it. From an Indian majority state-owned behemoth to a LSE-listed upstream company 51% owned by the government of the Emirate of Dubai – Dragon Oil – which was brought to the Oilholic’s attention recently.
Dragon’s share price is nowhere near its own 52-week high of 609p, but past few trading sessions following its H1 interim results have seen its price rise nearly 4% or 20p on average to about 490p in a decidedly bearish environment. (For the record, it is not the biggest LSE-listed riser of the day – that accolade goes to Heritage Oil but that’s a story for another day).
Question is do you buy it? Examining past performance seems to suggest so and Dragon has recorded a 25% average (gross) production growth for H1 2011. Furthermore, the upstream co has set itself a rather ambitious production growth target of 20% on an annualised basis for the year.
For 2011-2013, the company seeks to maintain target of average annual production growth in the range of 10% to 15%. Away from production projections and by force of habit the Oilholic always looks at the EPS which is up 125% year over year for the first half of this year. Additionally, it remains a takeover target for the majority owners (among others).

The Dragon’s central plank or prized asset is prospection in the Cheleken, an offshore Turkmen jurisdictional area in the eastern section of the Caspian Sea. This can be further narrowed down to an operational focus on the re-development of two oil-producing fields - Dzheitune (Lam) and Dzhygalybeg (Zhdanov).
On the ground Dragon looks promising; on paper it looks a shade one-dimensional. From an investor’s standpoint, that would make its shares a reasonable medium term investment. The Oilholic is always partial to the idea of going long; hence Dragon’s shares are appealing within reason.
Moving on to an offshore story of a grave kind, Royal Dutch Shell confirmed that a leak in a flow line leading to the Gannet Alpha oil platform, east of Aberdeen, Scotland, found on Wednesday is “under control with leakage considerably reduced.” According to local sources, a Remote-Operated Vehicle (ROV) has been deployed for inspection checks and to monitor the subsea leak.
Admittedly not much is coming out in terms of information, except for Shell’s claims that the oil would disperse naturally and not reach the UK coastline. The Oilholic finds the lack of information to be frustrating and sincerely hopes Shell is not doing a BP style “underestimation”. At this point there is no reason to believe that is the case.
Finally, both WTI and Brent are in the green up 1.83% and 1.31% in intraday at 15:15GMT. The bears are still in Crude town, but quite possibly taking a breather after last week’s mauling, or as Commerzbank analysts note, “Even if the short term trough appears to be reached, weak physical demand should keep oil prices in check.”