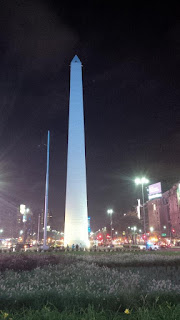 The Oilholic has hopped over from Santiago de Chile for a splash and dash pre-election visit to the Argentine capital of Buenos Aires. Braving fake banknotes, dodgy cab drivers, eateries where prices change daily and a services sector with few scruples if any, yours truly finds himself peeking at ongoing electioneering in the run-up to the October 25th presidential election, standing beside the Obelisco de Buenos Aires.

In all likelihood, a presidential run-off looms for a successor to Cristina Fernandez de Kirchner, who claims to be leaving behind a “crisis free” country where of course inflation is close to 30% by unofficial accounts and the IMF expects the economy to shrink further.

Centre-left candidate Daniel Scioli, handpicked by Kirchner (who cannot seek a third term under the constitution), is vying with centre-right man and Buenos Aires mayor Mauricio Macri. Not many in the Argentine capital, give the “third guy” Sergio Massa, a former ally of Kirchner's (before relations soured), much of a hope. However, his support – should a run-off happen – would be vital.

The incoming president would have an almighty mess to deal with in a country that has the dubious title of slipping from being a developed economy at the turn of the previous century to a third world country in the 21st century. Both main candidates promise to lower inflation to single digits and stimulate growth. Some (but not all) in Buenos Aires are simply glad Kirchner would be gone.

Discussing what shape the country’s energy policy in general (and oil and gas policy in particular) takes would be pointless before we know who the next occupant of the President’s office is. Much still remains at stake, including Buenos Aires’ continued hostility to offshore oil and gas exploration in the Falkland Islands (or Las Malvinas) as the Argentines call it, given the history of the territory. Despite Kirchner’s whinging to deflect attention from internal political woes, oil and gas explorers in the contentious British territory, claimed by Buenos Aires, are not going to go away.

If anything, the oil price decline, rather than something Buenos Aires does, is likely to have a bigger impact on future prospects. Away from the contentious side issue, it’s the direction of Argentina’s shale exploration that’s of a much bigger significance in a global context.

As the US Energy Information Administration noted earlier this year, if you exclude the US and Canada – only Argentina and China happen to be producing either natural gas from shale formations or crude oil from tight formations (tight oil) at an international level. How the country’s promising Neuquen Basin develops further would have a massive bearing on the economy. But where we go from here, given for instance the Repsol versus Federal Government histrionics of the past, would be anyone’s guess. 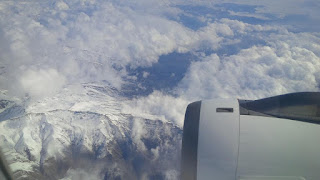 The Oilholic intends to probe the subject more deeply at a later stage both on this blog as well as for Forbes, once we know who the next Argentine president is.

However, for the moment, that’s all from Buenos Aires folks. Yours truly leaves you all with a breathtaking  view of the Andes Mountain range as seen from LAN Airlines flight 1447 coming from Santiago de Chile to Buenos Aires (right). Keep reading, keep it crude!

Update, October 26th: With 96% of the votes counted, according to the AFP, Scioli was marginally ahead with 36.7% of the vote, while Macri had 34.5%. Massa, who came a distant third has accepted defeat but not stated who he would be supporting. A presidential election run-off has been scheduled for November 22.