When the Oilholic paid a visit to Oman couple of years ago, natural gas was not atop the list of ‘crude’ industry intelligence gathering activities, one must admit. The Sultanate perhaps has the richest quality of all Middle Eastern crude oil varieties but there’s not a lot of it around, nor is Oman's reserves position anywhere near as strong as that of its neighbours.

Nonetheless, oil matters took up much of this blogger’s time and effort, including an excursion to the Musandam Peninsula, where Oman is in the process of having a decent crack at its first offshore exploration. The crucial subject of Omani natural gas largely slipped under the radar there and then, and largely up until now. 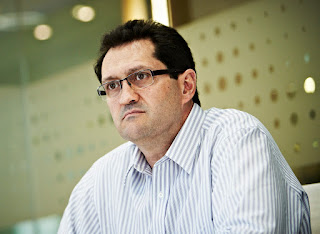 That’s until this blogger recently met David Eyton, Group Head of Technology at BP, for a fascinating Forbes interview (click here) on how the oil major is using digital tools such as 4D seismic to reshape the way it operates both upstream and downstream, and the subject of Oman came up.

The country's Khazzan-Makarem gas field is in fact among the many places benefiting from BP’s research and development spend of around two-thirds of a billion dollars per annum towards digital enablement of surveying, and more. What’s at stake for BP, and for Oman, is Khazzan’s proven reserve base of 100 trillion cubic feet. Unlike Shell, its FTSE 100 peer, BP isn’t digging for oil in the Sultanate, making the gas field – which it discovered in 2000 – a signature play.

At its core is Block 61, operated by BP Oman and Oman Oil Company Exploration and Production in a 60:40 joint venture partnership. Eyton says some of BP’s patented digital tools, including 4D seismic, are being deployed to full strength with a drilling schedule of approximately 300 wells over a 15 year period to achieve a plateau production rate of 1.2 billion cubic feet of gas per day.

“Khazzan has massive potential. It’s not shale in the strictest sense, but pretty tight gas and mighty difficult to crack owing to the low porosity of the reservoir rock,” Eyton said.

Invariably, BP has brought the full works into play to realise Block 61’s potential, drilling horizontal wells and using hydraulic fracturing technologies. "Advanced seismic imaging has played a huge part in understanding where the best bits of the reservoir are, and how to unlock them. Ultimately, that’s enabling development to proceed at a far better pace."

Construction work on Khazzan has commenced and first gas is expected in late 2017. Implications of Block 61 yielding meaningful volumes, as expected, cannot be understated. For Oman, the projected 1.2 bcf in daily production volume would be equivalent to an increment of over 30% of its total daily gas supply.

Concurrently, BP would look back in satisfaction at a Middle Eastern foray on business terms few oil and gas markets, bar Oman, would offer in an age of resource nationalism. As for the technology being deployed, it is already a winner, according to Eyton. That’s all for the moment folks! Keep reading, keep it ‘crude’!