Another two 'crude' days at CERAWeek '19 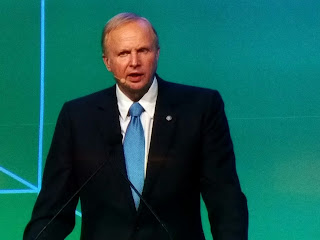 Day II or Tuesday (March 12) of CERAWeek zipped by, Wednesday is about to come to a close here in Houston and there have been several discussion points. Where to start when penning thoughts on the last 48 hours - a lot of plaudits were won by BP boss Bob Dudley's dinner speech overnight on the evolving oil landscape.

"Oil and gas majors need to recognise the world's low carbon future. They need to be progressive for society and pragmatic for investors," he noted to considerable applause.

Earlier on Tuesday, OPEC Secretary General Mohammed Barkindo took to briefing journalists and analysts. Key points made included being 'apolitical' on the Venezuelan situation and launching a polite but firm attack on efforts by US lawmakers to hit OPEC with antitrust action - dubbed the No Oil Producing and Exporting Cartels (NOPEC) Act. Here's yours truly's full report for Forbes.

The UAE government envoys were also in town promoting their catchy 'Oil and Gas 4.0' drive ranging from investing in digital assets to upskilling and hiring, from AI to robotics. William Clay Ford Jr was around too telling CERAWeek when Ford's F-150 truck's electric version is available it'll be a "completely different animal" and also admitted he had a soft sport for the Mustang.

Away from Brexit chaos back home, he also noted: "While the energy market will not be materially disrupted by Brexit; UK energy consumers would be left worse off if a declining GBP contributes to higher domestic energy bills linked to global markets."

US Energy Secretary Rick Perry also turned up for his second successive CERAWeek making a wide range of points from sanctions on Venezuela to President Donald Trump's opposition to NordStream 2.

.@SecretaryPerry at #CERAWeek: What is afoot in #Venezuela is 'inhumane' & 'unconscionable' and the US will use every economic tool available against the Maduro regime in support of the Venezuelan people #OOTT #oilandgas #CERAWeek2019 pic.twitter.com/g2bKzUBv5t
— Gaurav Sharma (@The_Oilholic) March 13, 2019

Finally, here is the Oilholic's take on what ExxonMobil's Marine Fuels business makes of the approaching IMO 2020 rule. Well that's all for the moment, more from Houston soon. Keep reading, keep it 'crude'!