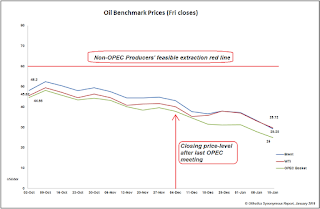 Successive bouts of over 10% week-on-week/five-day price declines have hit the oil market for six and made for a wretched start to 2016.

Closing Brent price of that Friday itself was some 10.54% lower, WTI was down 10.48% lower and OPEC Basket Price down 10.94% versus the closing price of December 31. Suddenly, $20 per barrel oil doesn’t sound all that implausible!

However, the Oilholic still maintains that while $20 oil is possible, it won’t stay there as an inevitable supply correction would kick-in. Excluding Gulf production, much of the world’s current oil production is barely being produced at cost, let alone at a marginal profit. As non-OPEC producers’ hedges roll-off, the pain will hit home for we are a long way from the $60 comfort threshold for many.

As for OPEC, even if the decline continues, the Oilholic feels there is little it can do other than to let the market take its own course. An OPEC cut would only keep rivals in the current game of survival called 'lower for longer'. That’s all for the moment folks! Keep reading, keep it ‘crude’!