US oil production decline much less than feared 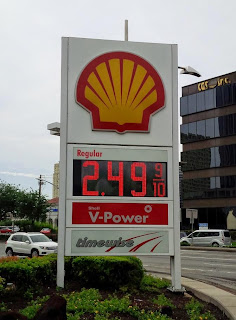 As the latest visit to Houston, Texas nears its conclusion, the Oilholic walked wistfully past a petrol station in the Lone Star state. What European motorists wouldn’t give for US$2.49 (£1.61) per US gallon (3.79 litres) to fill up their cars. That was the price was this morning (see left)!

Ditching wistfulness and moving on to price of the crude stuff, the latest energy outlook report from the US Energy Information Administration (EIA) sees Brent averaging $61 per barrel in 2015, with WTI averaging around $55. The EIA also expects a decline in crude oil production stateside from June onwards through to September.

However, there is little anecdotal evidence here on the ground in Houston to suggest the Eagle Ford is slowing down if activity elsewhere is. Furthermore, feedback from selected attendees at two events here – Baker & McKenzie’s 2015 Oil & Gas Institute 2015 and the Mergermarket Energy Forum – alongside most experts this blogger has spoken to since arrival, point to the said production decline being much less than feared.

On average, most opined that we’d be looking at a decline of between 35,000 to 45,000 barrels per day (bpd) this year. It would imply that US production would still stay within a very respectable 9.1 to 9.3 million bpd range with much of the drop coming from North Dakota. As if with eerie timing, American Eagle’s filing for Chapter 11 bankruptcy protection, following its inability to service debt on plays in North Dakota (and Montana), provided a near instant case in point.

Overall picture is less clear for 2016. If the oil price stays where it is, we could see a US production decline in the region of 60,000 to 100,000 bpd. EIA has estimated the decline might well be towards the upper end of the range.

It comes after analysts at Goldman Sachs labelled the recent oil prices “rally” as being a bit ahead of itself. Or to quote their May 11 email to clients in verbatim: “While low prices precipitated the market rebalancing, we view the recent rally as premature.

“The oil market focus has dramatically shifted over the past month, from fearing a breach of US crude oil storage capacity to reflecting a well under way oil market rebalancing. We view this shift in sentiment and positioning as excessive relative to still weak fundamentals.”

The Oilholic has repeatedly said over the past six weeks that both benchmarks are likely to stay within the $50-75 barrel range, as the decline in the number of operational oil rigs stateside was not high enough (yet) to trigger persistently lower US production. EIA data and feedback here in Houston supports such conjecture.

Meanwhile, the front page of the Financial Times loudly, but bleakly, declared on Tuesday that “more than $100 billion of projects” were on ice with Canada hit the hardest. According to the newspaper’s research, Shell, BP, Statoil and ConocoPhillips have all led moves to curtail capital spending on 26 major projects in 13 countries.

Speaking of ConocoPhillips, its CEO Ryan Lance has joined an ever increasing chorus stateside of oil industry bosses calling on the US government to lift its 40-year plus ban on crude exports.

At a conference in Asia, Lance told Bloomberg that the Houston-based oil and gas producer had sufficient production capacity stateside to cater the global market and ensure stable domestic supply. Right, so there’s no danger to Houstonians paying $2.49 per gallon to fill up their cars then?

To be fair, the ConocoPhillips boss is not alone in calling for a lifting of the ban. Since last July, the Oilholic has counted at least 27 independents, many mid-tier US-listed oil and gas producers including Hess Corp and Continental Resources, and almost all of the majors voicing a similar opinion.

They can say what they like; there won’t be any movement on this front until there is a new occupant in the White House. That’s all from Houston on this visit folks, its time for the big flying bus home. Keep reading, keep it ‘crude’!