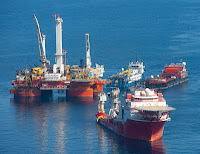 As BP received the biggest criminal fine in US history to the tune of US$4.5 billion related to the 2010 Gulf of Mexico oil spill, the Oilholic quizzed City analysts over what they made of it. Overriding sentiment of market commentators was that while a move to settle criminal charges in this way was expensive for BP, it was also a sound one for the oil giant.
Beginning with what we know, according to the US Department of Justice (DoJ), BP has agreed to plead guilty to eleven felony counts of misconduct or neglect of ships officers relating to the loss of 11 lives, one misdemeanour count under the Clean Water Act, one misdemeanour count under the Migratory Bird Treaty Act and one felony count of obstruction of Congress.
Two BP workers - Robert Kaluza and Donald Vidrine - have been indicted on manslaughter charges and an ex-manager David Rainey charged with misleading Congress according to the Associated Press. The resolution is subject to US federal court approval. The DoJ will oversee BP handover US$4 billion, including a US$1.26 billion fine as well as payments to wildlife and science organisations.
BP will also pay US$525 million to the US SEC spread over three years. The figure caps the previous highest criminal fine imposed on pharmaceutical firm Pfizer of US$1.2 billion. City analysts believe BP needed this settlement so that it can now focus on defending itself against pending civil cases.
“It was an expensive, but necessary closure that BP needed on one legal fronts of several,” said one analyst. The 2010 Deepwater Horizon disaster killed 11 workers and released millions of barrels of crude into the Gulf of Mexico which took 87 days to plug.
The company is expected to make a final payment of US$860 million into the US$20 billion Gulf of Mexico compensation fund by the end of the year. BP’s internal investigation about the incident had noted that, “multiple companies, work teams and circumstances were involved over time.”
These companies included Transocean, Halliburton, Anadarko, Moex and Weatherford. BP has settled all claims with Anadarko and Moex, its co-owners of the oil well and contractor Weatherford. It received US$5.1 billion in cash settlements from the three firms which was put into the Gulf compensation fund.
BP has also reached a US$7.8 billion settlement with the Plaintiffs' Steering Committee, a group of lawyers representing victims of the spill. However, the company is yet to reach a settlement with Transocean, the owner of the Deepwater Horizon rig and engineering firm Halliburton. A civil trial that will determine negligence is due to begin in New Orleans in February 2013.
Jeffrey Woodruff, Senior Director at Fitch Ratings, felt that the settlement was a positive move but key areas of uncertainty remained. “Although the settlement removes another aspect of legal uncertainty, it does not address Clean Water Act claims, whose size cannot yet be determined. It is therefore too early for us to consider taking a rating action,” he added.
Fitch said in July, when revising the company's Outlook to Positive, that BP should be able to cover its remaining legal costs without impairing its financial profile, and that a comprehensive settlement of remaining liabilities for US$15 billion or less would support an upgrade.
Recent asset sales have also strengthened BP's credit profile. Last month, BP posted a third quarter underlying replacement cost profit, adjusted for non-operating items and fair value accounting effects, of US$5.2 billion. The figure is down from US$5.27 billion recorded in the corresponding quarter last year but up on this year's second quarter profit of US$3.7 billion.
“The company has realised US$35 billion of its US$38 billion targeted asset disposal programme at end the end of the third quarter of 2012. Proceeds from the sale of its 50% stake in TNK-BP in Russia will further improve its liquidity, supporting our view that the company can meet legal costs without impairing its profile,” Woodruff concluded.
Meanwhile, Moody’s noted that the credit rating and outlook for Transocean (currently Baa3 negative), which is yet to settle with BP, was unaffected by the recent development.
Stuart Miller, Moody's Senior Credit Officer, said, "The big elephant in the room for Transocean is its potential exposure to Clean Water Act fines and penalties as owner of the Deepwater Horizon rig. The recent agreement between BP and DoJ did not address the claims under the Act."
However, he felt that Transocean will ultimately settle with the DoJ, and there was a good chance that the amount may be manageable given the company’s current provision level and cash balances.
“But if gross negligence is proven, a very high legal standard, the settlement amount could result in payments by Transocean in excess of its current provision amount,” Miller concluded.