The drivers, the forecasts & the ‘crude’ mood

At times wild swings in the crude market’s mood do not reflect oil supply and demand fundamentals. The fundamentals, barring a geopolitical mishap on a global scale, alter gradually unlike the volatile market sentiment. However, for most parts of Q2 and now Q3 this year, both have seemingly conspired in tandem to take the world’s crude benchmarks for a spike and dive ride.
Supply side analysts have had as much food for thought as those geopolitical observers overtly keen to factor in an instability risk premium in the oil price or macroeconomists expressing bearish sentiments courtesy dismal economic data from various crude consuming jurisdictions. For once, no one is wrong.
A Brent price nearing US$130 per barrel in mid-March (on the back of Iranian threats to close the Strait of Hormuz) plummeted to under US$90 by late June (following fears of an economic slowdown in China and India affecting consumption patterns). All the while, increasing volumes of Libyan oil was coming back on the crude market and the Saudis, in no mood to compromise at OPEC, were pumping more and more. 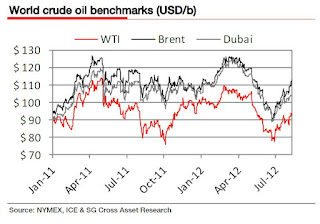 Then early in July, as the markets were digesting the highest Saudi production rate for nearly three decades, all the talk of Israel attacking Iran resurfaced while EU sanctions against the latter came into place. It also turned out that Chinese demand for the crude stuff was actually up by just under 3% for the first six months of 2012 on an annualised basis. Soon enough, Brent was again above the US$100 threshold (see graph on the right, click to enlarge).
Fast forward to the present date and the Syrian situation bears all the hallmarks of spilling over to the wider region. As the West led by the US and UK helps rebels opposed to President Bashar al-Assad, Russia is seen helping the incumbent; not least via a recent announcement concerning exchange of refined oil products from Russia for Syrian crude oil exports desperately needed by the latter.
A spread of hostilities to Lebanon, Jordan, Turkey and Iraq could complicate matters with the impact already having been seen in the bombing of Iraq-Turkey oil pipeline. Additionally, anecdotal evidence suggests the Saudis are now turning the taps down a bit in a bid to prop up the oil price and it appears to be working. The Oilholic will be probing this in detail on visit to the Middle East next week.
While abysmal economic data from the Old Continent may not provide fuel – no pun intended – to bullish trends, one key component of EU sanctions against Iran most certainly will. A spokesperson told the Oilholic that tankers insured by companies operating in EU jurisdictions will lose their coverage if they continue to carry Iranian oil from July.
Since 90% of the world's tanker fleet – including those behemoths called ‘supertankers’ passing through dangerous Gulf of Aden – is insured in Europe, the measure could take out between 0.8 and 1.1 million barrels per day (bpd) of Iranian oil from Q3 onwards according an Istanbul-based contact in the shipping business.
In fact OPEC’s output dipped by 70,000 bpd in month over month terms to 31.4 million bpd in July on the back of a 350,000 bpd drop in June over May. No prizes for guessing that of the 420,000 bpd production dip from May to July – 350,000 bpd loss is a direct result of the Iranian squeeze. Although Tehran claims it is a deliberate ploy.

With an average forecast of a rise in consumption by 1 million bpd over 2012 based on statements of various agencies and independent analysts, price spikes are inevitable despite a dire economic climate in Europe or the OECD in general.
Cast aside rubbish Iranian rhetoric and throw in momentary geopolitical supply setbacks like the odd Nigerian flare-up, a refinery fire in California or the growing number of attacks on pipeline infrastructure in Columbia. All of these examples have the potential to temporarily upset the apple cart if supply is tight.
“Furthermore, traders are wising up to fact that a price nudge upwards these days is contingent upon non-OECD consumption patterns and they hedge their bets accordingly. WTI aside, most global benchmarks look towards the motorist in Shanghai more than his counterpart in San Francisco these days,” says one industry insider of his peers.
When the Oilholic last checked at 1215 BST on August 23, the ICE Brent October contract due for expiry on September 13 was trading at US$115.95 while the NYMEX WTI was at US$97.81. It is highly likely that ICE Brent forward futures contracts for the remaining months of the year will end-up closing above US$110 per barrel, and almost certainly in three figures. Nonetheless, prepare for a rocky ride over Q4!
Moving away from pricing of the crude stuff, it seems the shutdown of Penglai 19-3 oilfield by the Chinese government in wake of an oil spill last year has hit CNOOC’s output and profits. According to a recent statement issued at Hong Kong Stock Exchange, CNOOC saw its H1 2012 output fall 4.6% on an annualised basis owing to Penglai 19-3 in which it holds 51% of the participating interest for the development and production phase. ConocoPhillips China Inc (COPC) is the junior partner in the venture.
This meant H1 2012 net income was down by 19% on an annualised basis from Yuan 39.34 billion to Yuan 31.87 billion (US$5 billion) according to Chief Executive Li Fanrong. CNOOC's US$15.1 billion takeover of Canada’s Nexen, a move which could have massive implications for the North Sea, is awaiting regulatory approval from Ottawa.
Away from the “third largest” of the big trio of rapidly expanding Chinese oil companies to a bit of good news, however temporary, for refiners either side of the pond. That’s if you are to believe investment bank UBS and consultancy Wood Mackenzie. UBS believes that for better parts of H1 2012, especially May and June, refining margins were at near “windfall levels” as the price of the crude stuff dipped in double-digit percentiles (25% at one point in the summer) while distillate prices held-up. 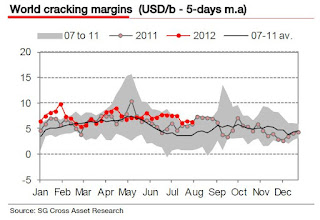 Wood Mackenzie also adds that given the refiners’ crude raw material was priced lower but petrol, diesel and other distillates remained pricey meant moderately complex refiners in northwest Europe made a profit of US$6.40 per barrel of processed light low sulphur Brent crude in June, compared with the average profit of 10 cents per barrel last year.
The June margin for medium, high sulphur Russian Urals crude was a profit of US$13.10 per barrel compared with the 2011 average of US$8.70, the consultancy adds. American refiners had a bit of respite as well over May and June. Having extensively researched refining investment and infrastructure for over two years, the Oilholic is in complete agreement with Société Générale analyst Mike Wittner that such margins are not going to last (see graph above, click to enlarge).
To begin with the French investment bank and most in the City expect global refinery runs to drop shortly and sharply to -1.3 million bpd in September versus August and -0.8 million bpd in October versus September. Société Générale also remains neutral on refining margins and expects them to weaken on the US Gulf Coast, Rotterdam and the Mediterranean but strengthen in Singapore. Yours truly will find out more in the Middle East next week. That’s all for the moment from London folks! Keep reading, keep it ‘crude’!
© Gaurav Sharma 2012. Photo 1: Russian oil pump jacks © Lukoil. Graph 1: Comparison of world crude oil benchmarks (Source: ICE, NYMEX, SG). Graph 2: World cracking margins (US$/barrel 5 days m.a) © SG Cross Asset Research, August 2012.
Posted by Gaurav Sharma at 8/23/2012 01:19:00 pm