So the press briefing room has emptied and the OPEC ministers have left the building for first time after failing to cut the cartel’s official output in face of crude price corrections exceeding 10% over a fiscal quarter. Thanks largely to Saudi Arabia, OPEC output stayed right where it was at 30 million bpd. Given the Eurozone crisis and a US, Indian and Chinese slowdown – OPEC members will invariably see Brent trading below US$100 per barrel for extended periods of time over the medium term.

It is doubtful if the Saudis would be too perturbed before the price of Brent slips below US$85 per barrel. As the Oilholic noted last year, studies suggest that is the price they may have budgeted for. Putting things into perspective analysts polled by the Oilholic here in Vienna suggest Iran would need a Brent price of US$110-plus to come anywhere balancing its budget.

“Stability for investments and expansion to flourish; Stability for economies around the world to grow; And stability for producers that allows them a fair return from the exploitation of their exhaustible natural resources,” he said in a speech at the OPEC seminar ahead of the meeting.

Problem is the Saudis have taken the message a little bit too literally; oil minister Ali Al-Naimi likened his country’s high production level and its insistence that OPEC’s official quota stays right where it is to a kind of an economic ‘stimulus’ which the world needs right now.

Of course on the macro picture, everyone at OPEC would have nodded in approval when El-Badri noted that fossil fuels – which currently account for 87% of the world's energy supply – will still contribute 82% by 2035.

“Oil will retain the largest share (of the energy supply) for most of the period to 2035, although its overall share falls from 34% to 28%. It will remain central to growth in many areas of the global economy, especially the transportation sector. Coal's share remains similar to today, at around 29%, whereas gas increases from 23% to 25%,” he added.

In terms of non-fossil fuels, renewable energy would grow fast according to OPEC. But as it starts from a low base, its share will still be only 3% by 2035. Hydropower will increase only a little – to 3% by 2035. Nuclear power will also witness some expansion, although prospects have been affected by events in Fukushima. However, it is seen as having only a 6% share in 2035.

On the investment front, for the five-year period from 2012 to 2016, OPEC's member countries currently have 116 upstream projects in their portfolio, some of which would be project or equity financed but majority won’t. Quite frankly do some of the Middle Eastern members really need to approach the debt markets after all? Moi thinks not; at best only limited recourse financing maybe sought. If all projects are realised, it could translate into an investment figure of close to US$280 billion at current prices.

“Taking into account all OPEC liquids, the net increase is estimated to be close to 7 million bpd above 2012 levels, although investment decisions and plans will obviously be influenced by various factors, such as the global economic situation, policies and the price of oil,” El-Badri concluded. 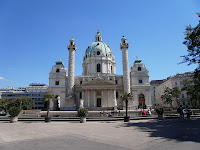 That’s all from Austria folks where the Oilholic is surrounded by news from the G20, rising cost of borrow for Spain and Italy, European Commission President Jose Manuel Barroso ranting, Fitch downgrading India’s outlook, an impending US Federal Reserve decision and the Greek elections! Phew!

Since it’s time to say Auf Wiedersehen and check-in for the last Austrian Airlines flight out of this Eurozone oasis of ‘relative’ calm to a soggy London, yours truly leaves you with a sunny view of the Church of St. Charles Borromeo (Karlskirche) near Vienna’s Karlsplatz area (see above right, click to enlarge). It was commissioned by Charles VI – penultimate sovereign of the Habsburg monarchy – in 1713. Johann Bernhard Fischer von Erlach, one of Austro-Hungarian Empire’s most renowned architects, came up with the original design with construction beginning in 1716.

However, following Fischer’s death in 1727, it was left to his son Joseph Emanuel to finish the project adding his own concepts and special touches along the way. This place exudes calmness, one which the markets, the crude world and certainly Mr. Barroso could do well with. Keep reading, keep it ‘crude’!