Starting with a note about a tragedy is not the Oilholic’s idea of a blog post but one that is unfolding off the coast of New Zealand is a deeply troubling one. A cargo ship – the Rena – which is stuck on a Kiwi reef since October 5 is presently spewing oil in that pristine part of the world. Local media and the BBC report large cracks in its hull with the ship listing badly with more than 350 tonnes of heavy fuel oil having spilled into the water so far killing over a 1,000 sea birds.

An even bigger source of worry is that with worsening weather conditions swells of up to 13ft are battering the ship. If it breaks apart, it will be one hell of mess as the Rena is carrying 1700 tonnes of heavy fuel and an additional 200 tonnes of diesel. A massive clean-up operation is presently underway led by Maritime New Zealand (MNZ), with the country’s army and thousands of volunteers. The Oilholic wishes them well. 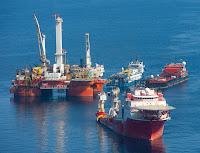 Moving on to a corporate story about another oil spill in a different part of the world – BP’s Deepwater Horizon incident. It emerged this week that after months of initially denying responsibility, Anadarko Petroleum reached a US$4 billion settlement agreement with BP related to the 2010 Gulf of Mexico spill.

While no one, except for the legal eagles, will ever know what transpired behind closed doors, from initially denying any culpability for the incident to the settlement with BP, Anadarko’s move is largely being seen as a pragmatic one. In fact, ratings agency Moody’s believes the payment is “materially less” than their loss assumption of up to US$8 billion.

The agency has placed Anadarko Ba1 Corporate Family Rating and Ba1 senior unsecured notes ratings under review for upgrade with approximately US$13.5 billion of rated debt affected. Pete Speer, Moody's Vice President notes: "Our ratings review will focus on the extent of the company's residual liability exposures related to the Deepwater Horizon event and the potential for continued improvement in its fundamental credit profile in 2012."

Additionally, Anadarko will transfer its 25 per cent ownership interest in Macondo (or Mississippi Canyon block 252 aka MC252) to BP in exchange for BP releasing all its claims against Anadarko for all outstanding invoices billed to Anadarko to date and to forego future reimbursement for any future costs related to the event.

Concurrently, BP has agreed to fully indemnify Anadarko for damage claims arising under the Oil Pollution Act, claims for natural resource damages and associated damage assessment costs, and any claims arising under the relevant joint operating agreement. The settlement does not provide for indemnification by BP against fines and penalties (e.g., Clean Water Act), punitive damages or certain other claims, which Anadarko does not consider to be a material financial risk.

In another development, Kinder Morgan Kansas Inc. announced that it has reached an agreement to purchase 100 per cent of the stock of El Paso Corporation (KMK). The acquisition of El Paso will be funded with US$11.8 billion of new debt at the KMK level and US$9.6 billion of KMK equity and is expected to close in the first half of 2012. Upon closing, KMK will be collapsed into Kinder Morgan Inc. (KMI).

Finally coming on to the crude price, there hasn’t been much movement on a week over week basis using both leading benchmarks. The reason is that last week’s gains were almost entirely wiped out, Monday to Monday. While Brent retreated from US$110 level to just above US$108 level; WTI fell from US$88 to US$85 in Tuesday intraday trading, which is pretty much where they were at the start of last week.

Same old reasons can be assigned too, i.e. Eurozone worries, perceived economic cooling in the Far East and heavy losses on equity markets. Myrto Sokou of Sucden Financial Research feels it is all about the Eurozone and how the markets will digest the news that there is no clear solution yet about Eurozone’s debt issues, while the current political and economic conditions in the region look very uncertain. “The sharp reality that the problems in the region are systemic is likely to weigh heavily on the markets in the coming weeks,” Sokou concludes and the Oilholic concurs.

Finally, to end on a happy note, on October 13 the Oilholic joined the great and the good of British journalism for the 2011 London Press Club Ball in aid of the Journalists’ Charity. On a great evening, one got to meet many old contacts and made yet newer ones in the backdrop of the London Natural History Museum.
The usual pomp, razz, wining, dining, dancing and networking aside, there was a very serious charity auction. The Oilholic (see above) tried rather unsuccessfully to bid for a year’s ride in an new Jaguar model but was outbid by much more serious punters all in it for a good cause. He also (sigh!) came seriously close to bagging a free flight to New York in a charity raffle – but alas it wasn’t to be! Oh well, there’s always a next time.
© Gaurav Sharma 2011. Photo 1: Macondo clean-up operation © BP. Photo 2: (L to R) 2011 London Press Club Ball, the dance floor and moi at the event © Gaurav Sharma, Oct 13, 2011
Posted by Gaurav Sharma at 10/19/2011 01:11:00 am