Buzz at Central Bank of Oil Before 1600 CET 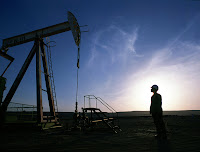 Ahead of the OPEC decision, prices for the forward month ICE Brent and NYMEX WTI futures contracts have fallen by US$2-3 on average over two weeks if the last fortnight is taken into consideration. That is largely down to the fact that traders have begun to factor in a possible increase in OPEC crude production quotas in the run up to the meeting here in Vienna today.
For the purposes of a price check, at 11:00am CET, ICE Brent is trading at US$116.26 down 0.5% or 16 cents, while WTI is down 99 cents or 1% at US$98.46. Additionally, the OPEC basket of twelve crudes stood at US$110.66 on Tuesday, compared with US$110.99 the previous day according to OPEC Secretariat calculations this morning.

Mike Wittner of Société Générale notes that if an increase in OPEC quota is made from a starting point of actual production, rather than the previous quota, it is that much more real, that much more serious, and potentially that much more bearish, at least in the short term.

“In contrast, if OPEC were to increase quotas by 1.5 million b/d, but versus previous quotas and not actual production, all they would be doing would be legitimising recent/current overproduction versus the old quota,” he adds.

Most analysts including Wittner and those present here believe a physical increase would be coming our way. Speaking of analysts, it is always a pleasure meeting Jason Schenker, President & Chief Economist of Prestige Economics at these OPEC meetings. He’s to be credited for describing OPEC as the Central Bank of Oil. The Oilholic heartily agrees and could not have put it better. Schenker believes OPEC is looking at the medium term picture and not just the next few months.

“As anticipated if there is a production hike today, the thinking at the “Central Bank of Oil” would be that it could carry them across to the end of Q4 2011 perhaps without facing or acting upon further calls for alterations of production quotas,” he says.

On a somewhat 'crude' but unrelated footnote, hearing about my recent visit to Alberta, Canada, Jason agrees there are a whole lot of crude opportunities for Canadians to be excited about. It would not be easy and it is certainly not cheap. But then cheap oil has long gone – this not so cheap resource is in a safe neutral country. Furthermore, one must never say never, but Canadians are not exactly queuing up to join OPEC any time soon (or ever).

Finally on a totally unrelated footnote, one can see the “Made in UK” label at OPEC HQ – it’s the paper cups near the water dispenser - not something extracted from the North Sea.