From a Sobering August to Sept's Crude Forecast! 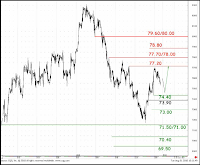 August has been a sobering month of sorts for the crude market. Overall, the average drop in WTI crude for the month was well above 8% and the premium between Brent crude and WTI crude futures contracts averaged about US$2. The market perhaps needed a tempering of expectations; poor economic data and fears of a double-dip recession did just that.
Even healthy US jobs data released last week could not stem the decline; though prices did recover by about 2% towards the end of last week. On Friday, the crude contract for October delivery lost 0.6% or US$0.41 to $74.60 a barrel on NYMEX. This is by no means a full blown slump (yet!) given that last week’s US EIA report was bearish for crude. It suggests that stocks built-up by 3.4 million barrels, a figure which was above market consensus but less than that published by the API. This is reflected in the current level of crude oil prices.

Looking specifically at ICE Brent crude oil futures, technical analysts remain mildly bullish in general predicting a pause and then a recovery over the next three weeks. In an investment note discussing the ICE Brent crude oil contract for October delivery, Société Générale CIB commodities technical analyst Stephanie Aymés notes that at first the market should drift lower but US$74.40/73.90 will hold and the recovery will resume to 77.20 and 77.70/78.00 or even 78.80 (Click chart above).

On the NYMEX WTI forward month futures contract, Aymés also sees a recovery. “73.40 more importantly 72.60 will hold, a further recovery will develop to 75.55/90 and 76.45 or even 77.05/77.25,” she notes. By and large, technical charts from Société Générale or elsewhere are not terribly exciting at the moment with the price still generally trading pretty much within the US$70-80 range.

Elsewhere in the crude world, here is a brilliant article from BBC reporter Konstantin Rozhnov on how Russia’s recently announced privatisation drive is sparking fears of a return to the Yeltsin era sale of assets.

On a crudely related note, after a series of delays, Brazil’s Petrobras finally unveiled its plans to sell up to US$64.5 billion of new common and preference stock in one of the largest public share offerings in the world.

A company spokeswoman said on Friday that the price of new shares would be announced on September 23rd. The IPO could well be expanded from US$64.5 billion to US$74.7 billion subject to demand; though initially Petrobras would issue 2.17 billion common shares and 1.58 billion preferred shares. The share capital will finance development of offshore drilling in the country’s territorial waters.

Lastly, the US Navy and BP said late on Sunday that the Macondo well which spilled over 200 million gallons of oil into the Gulf of Mexico poses no further risk to the environment. Admiral Thad Allen, a US official leading the government’s efforts, made the announcement after engineers replaced a damaged valve on the sea bed.

Concurrently, The Sunday Times reported that BP had raised the target for its asset sales from US$30 billion to US$ 40 billion to cover the rising clean-up cost of the Gulf of Mexico oil spill. The paper, citing unnamed sources, also claimed that BP was revisiting the idea of selling a stake in its Alaskan assets.