The three cities being – Delhi, Doha and Vienna, the three reports being Oilholic’s work on Latin American Offshore, Shale Oil & Gas and Refineries projects outlook, research for which was spread over December, January and February from the 20th World Petroleum Congress to the 160th OPEC Meeting to the streets of ‘crude’ Delhi.

The last of the three reports was published by Infrastructure Journal on Feb 29th and while the analysis in the reports remains the preserve of the Journal’s subscribers, the Oilholic is more than happy to share a few snippets starting with the Latin American offshore landscape, which shows no signs of a post ‘Macondo’ hangover [1].

In fact, the month of May, will be a momentous one for the region’s offshore oil & gas projects market in general and Brazil in particular, as the country would dispatch its first shipment of oil from ultradeepwater pre-sal (‘below the salt layer’) sources. The said export consignment of 1 million barrels destined for Chile is a relatively minor one in global crude oil volume terms. However, its significance for offshore prospection off Latin American waters is immense. 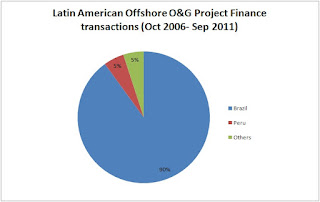 When thinking about Latin American offshore projects think Brazil; think Brazil and think Petrobras’ Lula test well in the Santos basin, named after the former president, which is producing 100,000 barrels per day (bpd). Almost over a third of the Chilean consignment originated from the Lula well according to the Oilholic’s sources.

What should excite project financiers, corporate financiers and technical advisers alike is the fact the company expects to pump nearly 5 million bpd by 2020 and its ambitious drive needs investment.

However, ignoring other jurisdictions in the region and focussing only on Brazil, its promise and problems would be a fallacy. Others such as Argentina, Columbia and prospection in Falkland Islands waters are worth examining, the latter especially from the standpoint of corporate financed asset acquisitions.

Data always helps in contextualising the market movements. Using the present Infrastructure Journal data series on project finance, which commenced in 2005, figures certainly suggest the sun is shining on the Brazilian offshore industry. Of the 15 Latin American offshore projects on record which reached financial close between October 2006 and Sept 2011, 13 were Brazilian along with one apiece from Panama and Peru (Click on pie-chart above to enlarge). With a cumulative deal valuation of just under US$9.3 billion, among these Brazil’s Guara FPSO valued at US$1.2 billion led the way reaching financial close in June 2011.

The year 2010, was a particularly good one for Brazil with five projects reaching financial close. Over the last three years, sponsors of offshore projects in the country have been consistent in approaching the debt markets and bringing three to five projects per annum to financial close, with 2011 following that trend. 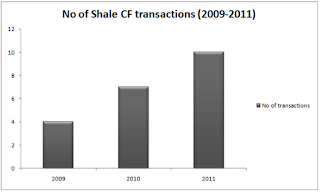 Moving on to the Oilholic’s second report, for all intents and purposes, Shale oil & gas prospection has been the energy story of the last half decade and Q1 2012 would be an apt time to scrutinise the ‘Fracks’ and figures[2].

To say that shale gas has altered the American energy landscape would be the understatement of the decade, or to be more specific at least half a decade. Courtesy of the process of hydraulic ‘fracking’, shale gas prospection – most of which was initially achieved in the US by independent upstart project developers – has been an epic game changer.

US shale gas production stood at 4.9 trillion cubic feet (tcf) by end-2011, which is 25% of total US production up from 4% in 2005. Concurrently, net production itself is rising exponentially owing to the shale drive according to the EIA.

However, a short term global replication of a US fracking heaven is unlikely and not just because there isn’t a one size fits all model to employ. While American success with shale projects has not escaped the notice of Europeans; financiers and sponsors in certain quarters of the ‘old continent’ are pragmatic enough to acknowledge that Europe is no USA. The recent shale projects bonanza stateside is no geological fluke; rather it bottles down to a combination of geology, American tenacity and inventiveness.

Europe’s best bet is Poland, but European shale oil & gas projects market is unlikely to record an uptick between 2012 to 2017 on a scale noticed in North America in general and the USA in particular between 2007 and 2012. The financing for shale projects – be it corporate finance or project finance – would be a slow, but steady trickle rather than a stream beyond North America.

Finally, to the Refineries report, given the wider macroeconomic climate, refinery infrastructure investment continues to face severe challenges in developed jurisdictions and Western markets[3]. Concurrently, the balance of power in this subsector of the oil & gas infrastructure market is rapidly tipping in favour of the East.

Even if refinery investment of state-owned Chinese oil & gas behemoths, which rarely approach the debt markets, is ignored – there is a palpable drive in emerging economies elsewhere in favour of refinery investment as they do not have to contend with overcapacity issues hounding the EU and North America.

For some it is a needs-based investment; for others it makes geopolitical sense as their Western peers holdback on investing in this subsector. The need for refined products is often seen superseding concerns about low refining margins, especially in the Indian subcontinent and Asia Pacific. 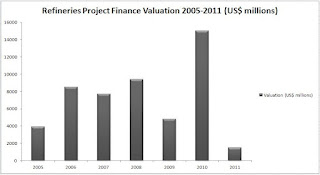 According to current IJ data, investment in refinery infrastructure via private or semi-private financing continues to remain muted; a trend which began in 2008. In fact, 2011 has been the most wretched year since the publication began recording refinery project finance data.

Updated figures suggest the year 2010, which saw the artificial fillip of Saudi Arabia’s mega Jubail refinery project (valued at US$14.04 billion) reach financial close, has been the best year so far for refinery project finance valuation despite closing a mere two projects. However, industry pragmatists would look at 2008 which saw ten projects valued at US$9.39 billion as a much better year (Click on bar-chart above to enlarge).

From there on it has been a tale of post global financial crisis woes with the market struggling to show any semblance of a recovery and most of the growth coming from non-OECD jurisdictions. In 2009, three projects valued at US$4.79 billion reached financial close, followed by two projects including Jubail valued at US$15.04 billion in 2010, and another two projects valued at US$1.49 billion in 2011. By contrast, the pre-crisis years of 2005, 2006 and 2007 averaged US$6.71 billion in terms of transaction valuations.

Only one deal from an OECD nation, which is a very recent member of the club, made it to the top five, namely Poland’s Grupa Lotos Gdansk Refinery Expansion valued at US$2.85 billion which reached financial close in 2008. Simply put, the future of infrastructure investment in this sub-component of the oil & gas business lies increasingly in the East wherein India could be a key market. That’s all for the moment folks! Keep reading, keep it ‘crude’!