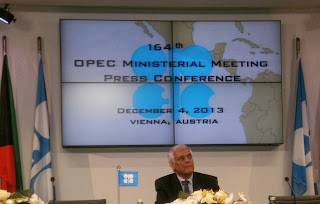 We’ve been here before dear readers, we’ve been here before. Main headline at the conclusion of the 164th OPEC conference here in Vienna is a familiar one. OPEC’s production quota stays at 30 million barrels per day and Secretary General Abdalla Salem El-Badri – long overdue to step down – stays on in his post, as member nations torn between Iranian and Saudi tussles fail to agree on a candidate for the post. So at the end of it all a battle-weary El-Badri, took the stage as usual. Not entirely bereft of a sense of humour, the secretary general had a few quips, the odd joke, brushed off scribes pokes to say that the cartel had considered the global economic outlook which remains “uncertain with the fragility of the Euro-zone remaining a cause for concern.”
“We was also noted that, although world oil demand is forecast to increase during the year 2014, this will be more than offset by the projected increase in non-OPEC supply. Nevertheless, in the interest of maintaining market equilibrium, the OPEC decided to maintain the current production level of 30 million bpd.”
In taking this decision, OPEC said it had reconfirmed its members’ readiness to swiftly respond to developments which could have an adverse impact on the maintenance of an orderly and balanced oil market.
El-Badri's tenure as Secretary General carries on for a period of one year, with effect from January 1, 2014. As the Oilholic noted in an earlier post, OPEC had a chance to send a message but missed a trick here. Despite the threat of incremental non-OPEC barrels, it failed to present a united front leaving El-Badri to carry the can in front of the world’s press and fly the OPEC flag.
The man himself though had a thing or two to say or avoid saying. Coming on the latter bit first, El-Badri declined comment on what increasing Iranian production would mean for the overall production quota. He also described incremental non-OPEC supply as "good for global consumers", acknowledged OPEC’s concerns about shale and said he was monitoring the supply side situation.
Yet later, he cut short an analyst’s question saying people should not “exaggerate” the impact of incremental or additional project barrels. “You keep going down this track and very soon you will see both prospective and thriving E&P jurisdictions lose their appetite for investing in new fields and enhancing existing facilities.” The Oilholic thinks the Secretary General has a point, albeit the point itself is a bit exaggerated.
One key theme to emerge was that OPEC members’ focus for exports was firmly to the East now. Several delegates and El-Badri himself acknowledged that supplies heading to the US – especially from Nigeria, Angola and Venezuela – were being diverted to far Eastern markets. The US it seems “wasn’t a priority” for OPEC in the first place; it’s even less so now. That's your lot from OPEC HQ! Keep reading, keep it ‘crude’!
To follow The Oilholic on Twitter click here.
To email: gaurav.sharma@oilholicssynonymous.com
© Gaurav Sharma 2013. Photo: OPEC Secretary General Abdalla Salem El-Badri at the conclusion of 164th OPEC meeting of ministers in Vienna, Austria © Gaurav Sharma December 4, 2013.
Posted by Gaurav Sharma at 12/04/2013 01:59:00 pm No comments:

Oil will continue to power global economies in the main for decades  in the absence of a viable alternative taking off meaningfully, but have you given thought to how the crude stuff is moved globally. Odds-on bet would be that an oil tanker springs to mind - that bulky out of sight and out of mind metal behemoth crucial to the movement of oil around the globe. In a fascinating book - Oil on Water by Paul French and Sam Chambers, the reader gets an insight into the tanker transport aspect of the crude supply chain.
As the economic balance of power, most notably manufacturing, shifts to the East, so does traffic in shipping lanes in the general direction of the growing economies of Indian and China, the authors note. Joining their ranks is the age old developed world crude consumer - Japan, and regional oil exporters turned importers from Vietnam to Indonesia.
Club them all together, factor in China's dominance, bring out the empirical and anecdotal evidence, and the rise in South and East Asia's growing imports of the bulk of two trillion tons of black gold moving across global shipping lanes is becoming increasing visible. In this concise book of just over 200 pages, split by 10 chapters, French and Chambers begin by describing why the uninterrupted flow of oil is essential to globalisation and increasingly so as manufacturing and markets move Eastwards to Asia.
The book is part narrative, part reportage, part case study and part history. The authors switch seamlessly between describing their first hand experience on-board a crude carrying vessel, the history of the business and geopolitical concerns. Central to it all are the buzzwords of the modern day crude business - "energy security." It's what makes Indian and Chinese strategic planners wake up and smell the coffee, it's what American politicians are increasingly paranoid about and it's what some regimes bank on as a political tool.

China's cravings are growing by the year. Where and how these tankers are loaded, their modus operandi, security concerns, business hiccups and finally their centrality to the crude business it seems is only in the global subconscious. French and Chambers deserve to be applauded for raising the issue via this book. Both authors have gone one step further; they have raised issues of potential alarm from infrastructure to piracy, from environmental concerns to conflict which could disrupt a crucial traffic flow which we take for granted and seldom see firsthand.
A discussion on life without oil, the economic shift eastwards, piracy and pipeline politics are all there in this book and in some detail accompanied by facts and figures to substantiate the authors' case. It is one the best books the Oilholic has read on the subject and a must read for anyone interested in the energy business, geopolitics and movement of crude oil. It touches on a much ignored yet supremely crucial component of the movement of crude oil. Many make assumptions about it; few care to talk about it. Hence, the authors of this book have done us all a service.
© Gaurav Sharma 2011. Photo: Front Cover - Oil on Water © Zed Books
Posted by Gaurav Sharma at 8/23/2011 07:41:00 am No comments: