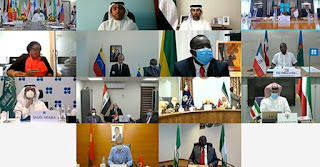 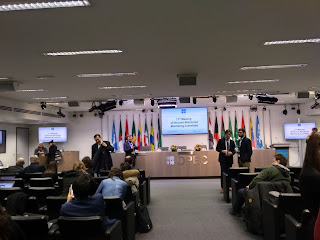 The Oilholic is back in Vienna, Austria for the 177th OPEC Ministers' meeting and their (now) regular haggling with 10 Russian led non-OPEC producers who've signed up to a collective cut of 1.2 million barrels per day (bpd).

With the cuts set to expire in March and the oil price nowhere near $70 per barrel using Brent as a benchmark, there is chatter here of deepening the cuts.

Ironically, these are being flogged to the media and analysts by Iraq; the one OPEC member that has hardly complied with its share of the cuts. However something is definitely afoot at Helferstorferstrasse 17. The reasons being a paucity of leaks, few unscheduled remarks, Iranians keeping mum despite being tetchy, and the media / analysts not being allowed "access to ministers" before their opening remarks to the conference, i.e. no "gang bang", only a "speech listening" at more than an arm's length.


Most unusual level of discipline being shown by #OPEC ministers, sources, no leaks, 2 of my oldest sources keeping mum. Additionally, media/analysts will not have "direct access" to ministers at opening session. Is a deeper #oil production cut coming? #OOTT #oilandgas pic.twitter.com/zSrG3moK3E
— Gaurav Sharma (@The_Oilholic) December 5, 2019

From that has emerged the "deepening of cuts" figure of 500,000 bpd. Of course, no details have been provided, especially on the level of Russian compliance. Apparently the likes of Nigeria and Iraq would be squeezed to fall in line too, according to the rumour mill.

What's more is this 500,000 bpd cut a "paper adjustment" with compliance current over 140% or is the cut being upped to 1.7 million bpd? Not too sure, not convinced as convincing answers are not forthcoming.

And will that even work? The Oilholic seriously doubts it; simply because 2-2.5 million bpd of non-OPEC supply growth is expected next year, and there are deep rooted concerns over demand, as noted on Forbes. Still the OPEC show goes on, and we'll probably have some finality after the OPEC+ meeting concludes tomorrow (Dec 6).

That's all for the moment from Vienna folks, but there's more to follow. Keep reading, keep it 'crude'!