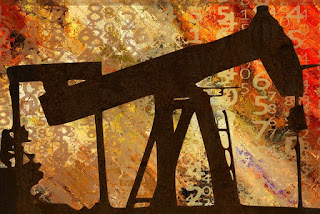 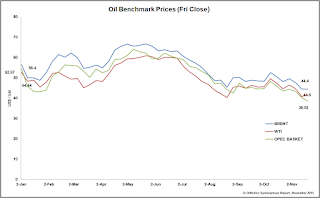 The market’s huffed and puffed, issues and influences have come and gone but both oil benchmarks – Brent and WTI have done little to escape their current ranges by more than $2 per barrel.

What’s more, if you outstrip the week’s volatility, on a five-day week-on-week basis to Friday, November 20, Brent ended a mere ten cents lower while WTI rose 67 cents. In fact we've been going sideways for over a month now (see graph, above left, click to enlarge).

Expect more of this for some time yet, as oversupply - the overriding market sentiment that has prevailed for much of 2015 - dominates market chatter and will continue to do so for at least another two quarters. With as much as 1.3 to 1.5 million barrels per day (bpd) of surplus crude oil regularly hitting the market, there’s little around by way of market influence to dilute the impact of oversupply.

The OPEC ministers’ meeting, due early December, is the next major event on the horizon, but the Oilholic does not expect the producers’ collective to announce a production cut. Since, all players are entrenched in their positions in a bid to keep hold of market share, it would be mighty hard to get all 12 players to agree to a production cut, more so as the impact of such a cut remains highly questionable in terms of lending meaningful (and sustainable) support to prices.

Away from the direction of the oil price, yet on a related note, Fitch Ratings unsurprisingly expects the macro environment for EMEA oil and gas majors to remain challenging in 2016. “Crude prices are unlikely to recover (soon), while refining margins will moderate from the record 2015 levels. However, cost deflation should become more pronounced and help to cushion the majors' profits,” the agency noted.

While the sector outlook is viewed by Fitch as “generally negative”, the rating outlook is "stable"  as the agency does not expect sector-wide negative rating actions. “Credit metrics of most players will remain stretched in 2016, but this cyclicality is a known feature of companies in this industry, and we will only take negative action where we expect the current downturn to permanently impair companies' credit profiles,” it added.