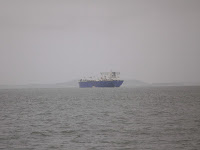 When in town, spending a few hours watching shipping lanes in the San Francisco bay area is an old pastime of the Oilholic’s, especially when it comes to spotting oil tankers which bring in some of the crude stuff to the area's refiners.

This morning, while sitting on Pier 39, yours truly spotted three pass by along with a few loaded containers - all following a well practised drill moving along a designated route under the Golden Gate Bridge, past Alcatraz Island before turning away left. Away from eye-view and the rather tranquil shipping lanes, there is local trouble at the mill for the already beleaguered refiners who have to contend with overcapacity and stunted margins.

It comes in the shape of a gradual but steady implementation of California's (relatively) new environmental regulations by 2020. This piece of regulation is known as California's Global Warming Solutions Act a.k.a. the AB 32, the central objective of which is to reduce Californian greenhouse gas emissions to 1990 levels by 2020.

According to the California Air Resources Board, in 2013 it will begin enforcing a state-wide cap on greenhouse gas emissions. The cap-and-trade programme coupled with the Low Carbon Fuel Standard would give California some of the most stringent air quality and emissions laws in the USA, although a spokesperson refused to describe it as such.

"California's increasingly stringent environmental regulations will challenge refiners over the next decade, increasing operating costs and negatively impacting refined product demand. These new rules will reduce cash flow that could be used for debt repayment or strategic growth and could discourage refiners from investing in California," says Gretchen French, a senior analyst and Vice President at Moody’s.

Among the majors, Chevron which has a significant refinery capacity in California, is likely to feel the impact most among its peers. Nonetheless as ratings agencies generally tend to rate integrated oil & gas companies higher than R&M only companies, Chevron should have no immediate concerns. The company's long-term debt is rated by Moody’s Aa1 with a stable outlook according to a communiqué dated March 27th.

Furthermore, Chevron's strong liquidity profile is characterised by free cash flow generation, ongoing asset sales proceeds, and a large cash position. Chevron's liquidity is further supported by US$6 billion of unused committed credit facilities due in December 2016. Moody's does not expect the new rules to affect the ratings for Tesoro, Alon, Phillips 66 or Valero either over the near to medium term, but the new standards could limit credit accretion.

Additionally, a pool of commentators here in the Bay Area seem to suggest that most players – especially Tesoro and Valero – have had a fair bit of time to indulge in regulatory risk mitigation. This piece of legislation was to be expected as California has admirably been a state keen on conservation, forestry and the environment.

The “Father of the US National Parks” – John Muir – an author, naturist and an early advocate of preservation of wilderness in the USA did most of his life’s important work here in California’s Sierra Nevada mountain range. In 1908, Muir who also founded one the country’s most important conservation organisation – the Sierra Club – had a national park named after him. This amazing redwood forest - the Muir Woods National Monument near San Francisco - now provides joy to countless visitors among whom the Oilholic was one this afternoon.

More than six miles of trails are open for visitors to experience an easy walk on the valley floor through the primeval redwood forest. Though the forest is naturally quiet, the Oilholic is in agreement with the US National Park Service, that people are key to preserving the ancient tranquillity of an old-growth forest in our noisy, modern world. That’s all for the moment folks! Keep reading, keep it ‘crude’!