On another BP sale, another Chavez term & more

A not so surprising news flash arrived this week that BP has finally announced the sale of its Texas City refinery and allied assets to Marathon Petroleum for US$2.5 billion. A spokesperson revealed that the deal included US$600 million in cash, US$1.2 billion for distillate inventories and another US$700 million depending on future production and refining margins.
Following the Carson oil refinery sale in California, the latest deal ratchets BP’s asset divestment programme up to US$35 billion with a target of US$38 billion within reach. It is time for the Oilholic to sound like a broken record and state yet again that – Macondo or no Macondo – the oil major would have still divested some of its refining and marketing assets regardless.
However, for fans of the integrated model – of which there are quite a few including ratings agencies who generally rate integrated players above R&M only companies – the head of BP's global R&M business Iain Conn said, "Together with the sale of our Carson, California refinery, announced in August, the Texas City divestment will allow us to focus BP's US fuel investments on our three northern refineries."
Things have also picked-up pace on the TNK-BP front. On Tuesday, Reuters reported that BP’s Russian partners in the venture Alfa Access Renova (AAR) would rather sell their stake than end-up in a ‘devalued’ partnership with Kremlin-backed rival Rosneft. On Wednesday, the Russian press cited sources claiming a sale of BP’s stake to Rosneft has the full backing of none other than Russian President Vladimir Putin himself. Now that is crucial.

On a visit to Moscow and Novosibirsk back in 2004, the Oilholic made a quick realisation based on interaction with those in the know locally – that when it comes to natural resources assets the Kremlin likes to be in control. So if BP and the Russian government have reached some sort of an understanding behind the scene, AAR would be best advised not to scream too loudly.
Another hypothesis gaining traction, in wake of AAR’s intention to sell, is that instead of being the seller of its stake in TNK-BP, the British oil major could now turn buyer. BP could then re-attempt a fresh partnership with Rosneft; something which it attempted last year only for it to be scuppered by AAR.
There can be any amount of speculation or any number of theories but here again a nod from the Kremlin is crucial. Away from ‘British Petroleum’ (as Sarah Palin and President Obama lovingly refer to it in times of political need) to the British Government which reiterated its support for shale exploration earlier this week.
On Monday, Minister Edward Davey of UK's Department of Energy and Climate Change (DECC) expressed hopes of lifting a suspension on new shale gas exploration. It was imposed in 2011 following environmental concerns about fracking and a series of minor earthquakes in Lancashire triggered by trial fracking which spooked the nation. In near sync with Davey, Chancellor of the Exchequer George Osborne told the Conservative Party conference in Birmingham that he was considering a 'generous new tax regime' to encourage investment in shale gas.
In case you haven’t heard by now, Hugo Chavez is back as president of Venezuela for another six year stint. This means it will be another rendezvous in Vienna for the Oilholic at the OPEC meeting of ministers in December with Rafael Ramirez, the crude Chavista likely to be hawkish Venezuela’s man at the table. Opposition leader Henrique Capriles believed in change, but sadly for the Venezuelan economy grappling with mismanagement of its ‘crude’ resources and 20% inflation, he fell short.
On January 10, 2012 when Chavez will be inaugurated for another term as Venezuela's president, he will be acutely aware that oil accounts for 50% of his government’s revenue and increasingly one dimensional economy. Bloomberg puts Chinese lending to Venezuela between 2006 and 2011 at US$42.5 billion. In a staggering bout of frankness, Ramirez admitted in September that of the 640,000 barrels per day (bpd) that Venezuela exported to China, 200,000 bpd went towards servicing government debt to Beijing.
The country's oil production is hardly rising. Just as Chavez’s health took a toll from cancer, national oil company PDVSA has not been in good health either. Its cancer is mismanagement and underinvestment. Most would point to an explosion in August when 42 people perished at the Amuay refinery – Venezuela’s largest distillate processing facility as an example. However, PDVSA has rarely been in good health since 2003 when it fired 40% of its workforce in the aftermath of a general strike aimed at forcing Chavez from power.
Staying with Latin America, the US Supreme Court has said it will not block a February 2011 judgement from an Ecuadorean court that Chevron must pay US$19 billion in damages for allegedly polluting the Amazonian landscape of the Lago Agrio region. The court’s announcement is the latest salvo in a decade-long legal tussle between Texaco, acquired by Chevron in 2001, and the people of the Lago Agrio.
The Ecuadorians and Daryl Hannah (who is not Ecuadorian) wont rejoice as Chevron it is not quite done yet. Far from it, the oil major has always branded the Ecuadorian court’s judgement as fraudulent and not enforceable under New York law. It has also challenged it under an international trade agreement between the US and Ecuador.
The latter case will be heard next month – so expect some more ‘crude’ exchanges and perhaps some stunts from Ms. Hannah. That’s unless she is under arrest for protesting about Keystone XL! That’s all for the moment folks! Keep reading, keep it ‘crude’ or Elle Driver might come after you!
© Gaurav Sharma 2012. Photo: East Plant of the Texas City Refinery, Texas, USA © BP Plc
Posted by Gaurav Sharma at 10/10/2012 11:15:00 pm No comments: 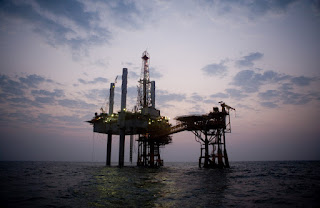