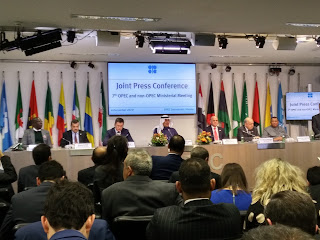 And if the new chief OPEC powerbroker Prince Abdulaziz bin Salman is to be believed, and every participant well...err....participates, the market could well be looking at a real terms cut of 2.1 million bpd.

That is wishful thinking and will be severely tested as the Saudis say OPEC+ compliance would be keen monitored. To this effect, OPEC will have an extraordinary meeting of ministers in March 2020, on top of its regular meeting in June.

For its part Saudi Arabia will up its cuts "voluntarily" to 400,000 bpd (+167,000 bpd) bringing its headline production down to 9.744 million bpd. Errant Iraq has promised to cut 50,000 bpd. Nigeria, Libya and Iraq remain exempt, but Nigerian Minister Timipre Marlin Sylva said his country would be cutting production "voluntarily."

There seems to be no shortage of volunteers. Here are two other key quotes:


Finally, the Saudi Minister sounded pretty peeved about getting a "battering from the media" about the Saudi Aramco IPO, adding that the company's valuation would hit $2 trillion very soon. And that's that; more composed thoughts upon the Oilholic's return to London, but that's all for the moment from OPEC folks! Keep reading, keep it 'crude'!