Oil market in wait & see mode ahead of OPEC 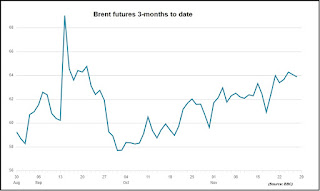 The next OPEC+ ministers' meeting on December 5-6 is upon us, and the Oilholic's reading of the past few weeks does seem to suggest the oil market is in a holding pattern. More so as there has been little by way of resolution of the ongoing US-China trade spat.

For many intents and purposes, trade concerns remain the key market driver, perhaps making OPEC a bit of a non-event. A rollover of the OPEC+ agreement - that has kept 1.2 million barrels per day of production - out of the market has already been priced in. So the only surprise to the upside would be if the producers' group introduces even deeper cuts; a scenario that on paper appears to be highly unlikely. 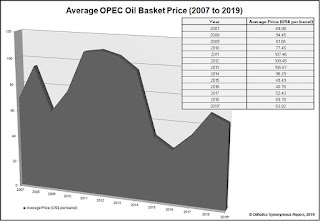 Meanwhile, excluding a short-lived spike in the wake of the drone attack on Saudi Aramco, oil prices, using Brent as a benchmark, have largely remained range-bound at lower $60 per barrel levels oscillating between $58-$65 (see chart above left, click to enlarge). . OPEC's basket of 14 crude oils meanwhile is averaging just shy of $64 at the time of writing (see chart left, click to enlarge).

While the OPEC meeting would be interesting from the standpoint of soundbites, this blogger is not holding his breath out for any substantial price movement. Continuing with the markets theme, yours truly also made several observations from the recently concluded ADIPEC in Abu Dhabi, for various publications, including OPEC's ongoing dilemma for Forbes. There's also the issue of oil demand, and while attention has been focussed on how the US-China trade spat is impacting it, here's the Oilholic's take on whether, and by how much, the proliferation of electric vehicles could stunt demand growth.

Plenty of words were penned on the Aramco IPO too, but here's a piece - via Rigzone - on how Brit oil majors Shell and BP are attempting to add long-term value for shareholders. Additionally, here are the Oilholic's recent Forbes reports on ADNOC upping its digital drive and India's wooing of global energy investors as its energy demand continues to rise.

Finally, here is the Oilholic's missive on another piece of industry process efficiency and optimisation kit that has just been successfully tested by ABB in waters off Vaasa, Finland. The global software industrial giant claims to have found the "holy grail" of offshore subsea power solutions via its joint industry project with Chevron, Equinor and Total.

Its latest power distribution and conversion technology system for energy companies will be able to provide a reliable supply of up to 100MW of power, over distances up to 600km out at sea and down to a whopping 3,000m water depth.

ABB claims the system will need "little or no maintenance for up to 30 years following deployment" making oil and gas production feasible in far out and deep ocean environments. It'll be interesting to see the take up of the kit, and company sources have promised to update the market on a regular basis.

And on that note, its time to end this blog post leaving you with a view of the waters of the Gulf of Bothnia, from Kalle's Inn, Finland (above right, click to enlarge);  a popular spot near Vaasa that the Oilholic visited before heading back home. From here you can catch the Northern Lights, maybe even rent one of the waterfront cabins for the night. That's all for the moment folks! Keep reading, keep it 'crude'!