Giving OPEC 176 a miss, but not Vienna 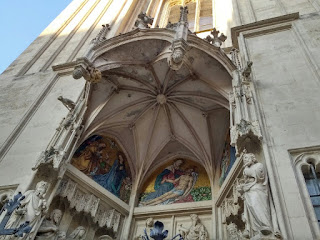 As far as OPEC meetings go, the Oilholic hasn't missed a single one since 2008. Alas, the run had to come to an end at some point and the 176th OPEC Ministers Meeting on July 1-2 will be that point.

However, it is not for lack of trying. In farcical circumstances, OPEC postponed the meeting twice, from April to June to finally the stated July date. Other business, family and personal commitments, as well as business meetings already penned in Vienna around OPEC's June dates (of June 25-26) could not be rearranged for a second time running.

Hence, the Oilholic found himself in the Austrian capital the week before with the rare luxury of not having to spend most of his time camped at OPEC's hub of Helferstorferstrasse 17. Instead, a stroll past Katholische Kirche St. Peter (St. Peter's Catholic Church) nearby admiring its entrance in 35 C sunshine was a nice short distraction from 'crude' matters this week.

Nevertheless, and not to digress, this blogger does not believe he will be missing anything too dramatic. A rollover of OPEC's ongoing 1.2 million barrels per day (bpd) cuts along with 10 Russia-led non-OPEC producers is more or less guaranteed. Not least because the organization lacks a clear exit strategy for the cuts, as one opined on Rigzone.

Fellow industry analysts, academics and researchers the Oilholic interacted with here in Vienna are of a similar mindset; and inventory rebalancing – the official line for instituting the cuts – remains as rocky as ever while OPEC continues to bleed market share as it produces fewer barrels.

Data aggregators say OPEC production is at its lowest since in quite a while. According to a Reuters survey, OPEC pumped 30.17 million bpd in May, down 60,000 bpd from April and the lowest output total on record since 2015.

The Oilholic expects at least a six-month rollover at the stated cuts level of 1.2 million bpd with Saudi Arabia, as usual, carrying most of the burden. At some point, something has got to give. However, the July 1-2 summit will not be that point. 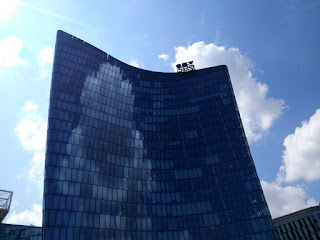 Away from OPEC chatter, the Oilholic also visited Austrian giant OMV's imposing headquarters in Vienna to discuss market permutations, the evolving global fuel mix and the company's take on the energy landscape.

More on that to follow shortly but in the meantime, here is a conversation on Forbes’ behalf with David Gilmour, boss of BP Ventures, the oil giant's venture capital funding arm that's looking to future proof the FTSE 100 company.

That's all from Vienna folks. Some post-OPEC analysis to follow from London next week! Keep reading, keep it 'crude'!

Addendum I (30.06.19): Upon his arrival in Vienna, well before the OPEC meeting has even begun Saudi Oil Minister Khalid Al-Falih has already said he is in favour of a “6 to 9 month” rollover of the output cut, and preferably "9 months."

Addendum II (30.06.19): Remember that bit about risking market share, well here’s some analysis by Bloomberg, ahead of the ministers’ meeting suggesting that OPEC’s output is on track to slide below 30% of the global market share for the first time in three decades. Q.E.D.

Addendum III (30.06.19): OPEC members’ compliance rate with oil production cuts stood at 163% in May, according to S&P Global Platts.