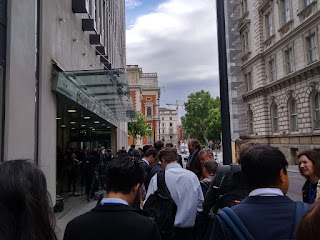 So many scribes and analysts, or in the case of yours truly, those who wear both hats, trying to get in before the whole jamboree began. 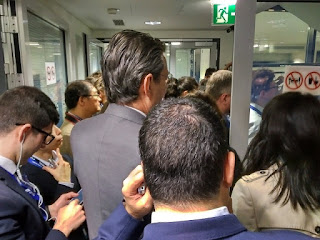 So here's to more than 150 of us all trying to get that elusive crude exclusive, including, if the Oilholic may add, quite a few Russian journalists here to cover the 2nd OPEC and non-OPEC ministers meeting after the 172nd OPEC meeting ends.

And if you were in any doubt whether or not, its a done deal here, Saudi Oil Minister Khalid Al-Falih has said Opec's plan was to "stay steady" and go through the next nine months of oil production cuts. (Here's the full report).

"The drawdown of inventories has clearly begun. OPEC and non-OPEC producers will work to bring inventories down to 5-year averages," Al-Falih added, saying he looks forward to working with non-OPEC colleagues.

That's all from Vienna, for the moment folks! More shortly! Keep reading, keep it 'crude'!