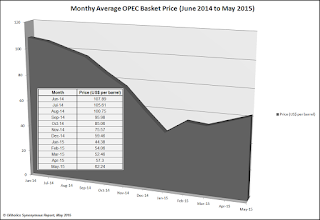 The OPEC meeting is over, quota stays at 30 million barrels per day, and by the way – it was never a quota but rather a recommendation in Secretary General Abdalla El-Badri’s own words.

From now until December, when OPEC meets next, member nations would be contemplating what constitutes an equitable price (whether or not that’s achievable given the state of the market) and use that as a basis for deliberations next time around. Both benchmarks ended sharply lower on Friday relative to the previous week’s closing price after OPEC’s decision. Brent shed 3.51% on its May 29 closing price while the WTI lost 2.32%. OPEC’s daily basket price came in at US$59.67 a barrel, right before it reached its latest decision.

In fact, OPEC’s average monthly basket price tells its own story. A graph drawn by the Oilholic (see above left, click to enlarge) based on OPEC data, shows the price falling from an average of $107.89 in June 2014 to $62.24 in May; a decline of 42.31% in that time. It went down a cliff between June and January, before recovering to where we are at the moment.

This blogger firmly believes we are stuck here or hereabouts for a while, as probably do most oil producers (OPEC or non-OPEC). While most would want as high a price as possible, what would they deem as equitable? The figure varies, but when asked about the current price level, Saudi oil minister Ali Al-Naimi quipped: “You can see that I am not stressed, I am happy.”

Of course, the price threshold point ensuring Al-Naimi’s happiness would be a lot lower than regional rivals Iran or Iraq. The Iranians expressed a desire for $75, the uppermost and highly unlikely top range of the Oilholic’s short-term forecast.

Angola, Nigeria, Ecuador and Venezuela said $80 was their equitable price. One suspects, Venezuela – in the midst of an economic crisis – needs a three-figure price but cast its lot with those quoting the highest, even if its $20 short of what it is after.

When quizzed about the oil price, El-Badri said, “OPEC does not have a so-called oil price target; we leave that to the market.

“I agree that there are income disparities within OPEC. We have rich oil exporters and poor oil exporters; our decision in November [to hold production] as well as what we have decided today is in the interest of all members.”

The rich ones – Saudi Arabia, United Arab Emirates, Qatar and Kuwait – met well before the OPEC seminar and the subsequent minister's summit, and agreed on keeping the production ceiling where it was at 30 million bpd.

OPEC's production actually came in at 30.93 million bpd in April, and could unofficially be anywhere between 31.5 to 32 million bpd depending on which recent industry survey you choose to rely on. It’s probably why El-Badri downgraded OPEC’s “quota” into a “members’ recommendation”. The Oilholic though couldn’t help noticing there was quiet satisfaction within OPEC about the market not getting materially worse between its meetings with little prospect of prices getting entrenched below $40.

One does not see it coming either. As we enter the latter half of the year, focus will shift towards global economic growth and how it supports demand for crude oil. OPEC noted the global economic recovery had stabilised, albeit with growth at moderate levels.

In the current year, global GDP growth is projected at 3.3%, and expected to be at a slightly higher level of 3.5% for 2016. As a consequence, OPEC expects world oil demand to increase in the second half of 2015 and in 2016, with growth driven by non-OECD countries.

Of course, the said growth levels wont see the oil price shoot up given more than adequate supplies, but will probably see 8 out of 12 OPEC members pretty content, whether they get what they say is their equitable price or not. That’s that from the 167th OPEC meet; time to head back to London town. Keep reading, keep it ‘crude’!