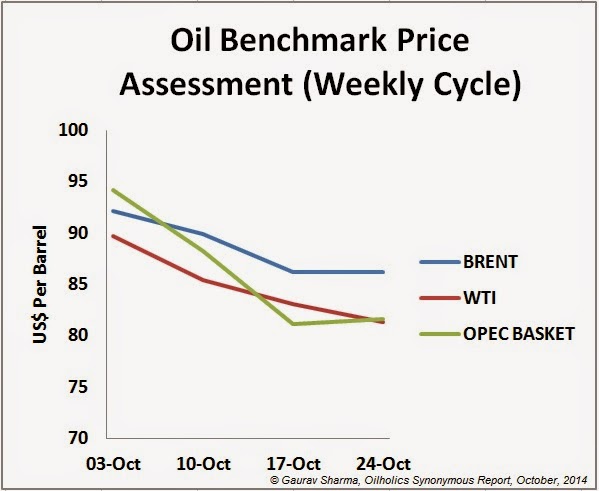 We are well into the quarterly results season with oil and gas companies counting costs of the recent oil price slump on their profit margins among other things. The price itself is a good starting point.

The Oilholic’s latest 5-day price assessment saw Brent nearly flat above US$86 per barrel at the conclusion of the weekly cycle using each Friday this month as a cut-off point (see left, click on graph to enlarge).

Concurrently, the WTI stayed above $81 per barrel. It is worth observing the level of both futures benchmarks in tandem with how the OPEC basket of crude oils fared over the period. Discounting kicked-off by OPEC heavyweight Saudi Arabia earlier in the month, saw Iran and Kuwait follow suit. Subsequently, the OPEC basket shed over $6 between October 10 and October 24. If Saudi motives for acting as they are at the moment pique your interest, then here is one’s take in a Forbes article. Simply put, it’s an instinct called self-preservation!

Recent trading sessions seem to indicate that the price is stabilising where it is rather than climbing back to previous levels. As the Western Hemisphere winter approaches, the December ICE Brent contract is likely to finish higher, and first contract for 2015 will take the cue from it. This year's average price might well be above or just around $100, but betting on a return to three figures early on into next year seems unwise for the moment.

Reverting back to corporate performance, the majors have started admitting the impact of lower oil prices. However, some are facing quite a unique set of circumstances to exasperate negative effects of oil price fluctuations.

For instance, Total tragically and unexpectedly lost its CEO Christophe de Margerie in plane crash last week. BP now has Russian operational woes to add to the ongoing legal and financial fallout of the Gulf of Mexico oil spill. Meanwhile, BG Group has faced persistent operational problems in Egypt but is counting on the appointment of Statoil’s boss as its CEO to turn things around.

On a related note, oilfield services (OFS) companies are putting on a bullish face. The three majors – Baker Hughes, Halliburton and Schlumberger – have all issued upbeat forecasts for 2015, predicated on continued investment by clients including National Oil Companies (NOCs).

In a way it makes sense as drilling projects are about the long-term not the here and now. The only caveat is, falling oil prices postpone (if not terminate) the embarkation of exploration forays into unconventional plays. So while the order books of the trio maybe sound, smaller OFS firms have a lot of strategic thinking to do.

Nonetheless, we ought to pay heed to what the big three are saying, notes Neill Morton, analyst at Investec. “They have unparalleled global operations and unrivalled technological prowess. If nothing else, they dwarf their European peers in terms of market value. As a result, they have crucial insight into industry activity levels. They are the ‘canaries in the coal mine’ for the entire industry. And what they say is worth noting.”

Fair enough, as the three and Schlumberger, in particular, view the supply and demand situation as “relatively well balanced”. The Oilholic couldn’t agree more, hence the current correction in oil prices! The ratings agencies have been busy too over the corporate results season, largely rating and berating companies from sanctions hit Russia.

On October 21, Moody's issued negative outlooks and selected ratings downgrade for several Russian oil, gas and utility infrastructure companies. These include Transneft and Atomenergoprom, who were downgraded to Baa2 from Baa1 and to Baa3 from Baa2 respectively. The agency also downgraded the senior unsecured rating of the outstanding $1.05 billion loan participation notes issued by TransCapitalInvest Limited, Transneft's special purpose vehicle, to Baa2 from Baa1. All were given a negative outlook.

Additionally, Moody's changed the outlooks to negative from stable and affirmed the corporate family ratings and probability of default ratings of RusHydro and Inter RAO Rosseti at Ba1 CFR and Ba1-PD PDR, and RusHydro's senior unsecured rating of its Rouble 20 billion ($500 million) loan participation notes at Ba1. Outlook for Lukoil was also changed to negative from stable.

On October 22, Moody's outlooks for Tatneft and Svyazinvestneftekhim (SINEK) were changed to negative. The actions followed weakening of Russia's credit profile, as reflected by Moody's downgrade of the country’s government bond rating to Baa2 from Baa1 a few days earlier on October 17.

Meanwhile, Fitch Ratings said the liquidity and cash flow of Gazprom (which it rates at BBB/Negative) remains strong. The company’s liquidity at end-June 2014 was a record RUB969 billion, including RUB26 billion in short-term investments. Gazprom also reported strong positive free cash flows over this period.

“We view the record cash pile as a response to the US and EU sanctions announced in March 2014, which have effectively kept Gazprom, a key Russian corporate borrower, away from the international debt capital markets since the spring. We also note that Gazprom currently has arguably the best access to available sources of funding among Russian corporate,” Fitch said in a note to subscribers.

By mid-2015, Gazprom needs to repay or refinance RUB295 billion and then another RUB264 billion by mid-2016. Its subsidiary Gazprom Neft (rated BBB/Negative by Fitch) is prohibited from raising new equity or debt in the West owing to US and EU sanctions, in addition to obtaining any services or equipment that relate to exploration and production from the Arctic shelf or shale oil deposits.

On the other hand, a recent long term deal with the Chinese should keep it going. That’s all for the moment folks! Keep reading, keep it ‘crude’!