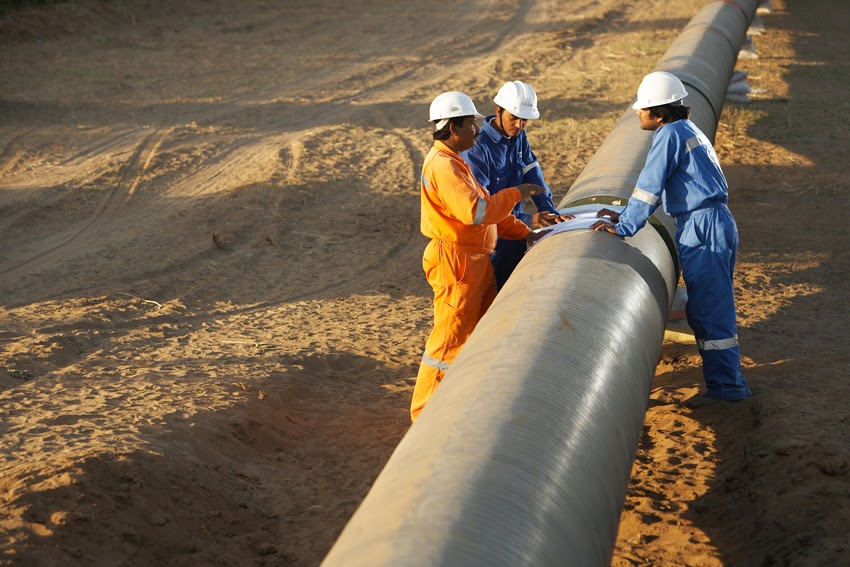 While the Europeans are busy squabbling about how to diversify their natural gas supplies and reduce reliance on Russia, the country's President Vladimir Putin hedged his bets earlier this week and reacted smartly by inking a 30-year supply deal with China.

No financial details were revealed and the two sides have been haggling over price for better parts of the last decade. However, yet again the Russian president has proved more astute than the duds in Brussels! Nevertheless, the Oilholic feels Russia would have had to make substantial compromises on price levels. By default, the Ukraine standoff has undoubtedly benefitted China National Petroleum Corp (CNPC), and Gazprom has a new gas hungry export destination.

Still there is some good news for the Europeans. Moody's believes that unlike in 2008-09, when gas prices spiked in the middle of the winter due to the cessation of Russian gas supplies to Europe via Ukraine, any temporary disruption via Ukraine would have only have a muted impact.

"This opinion factors in a combination of (1) lower reliance on Ukraine as a transit route, owing to alternative supply channels such as the Nord Stream pipeline which became operational in 2011; (2) low seasonal demand in Europe as winter has come to an end; and (3) gas inventories at high levels covering a full month of consumption," the ratings agency noted in a recent investment note.

Meanwhile, a political tsunami in India swept the country's Congress party led government out of power putting an end to years of fractious and economic stunting coalition politics in favour of a right-wing nationalist BJP government. The party's leader Narendra Modi delivered a thumping majority, which would give him the mandate to revive the country's economic fortunes without bothering to accommodate silly whims of coalition partners.

Modi was the chief minister of Gujarat, one of the country's most prosperous provinces and home to the largest in the refinery in the world in the shape of Jamnagar. In many analysts' eyes, regardless of his politics, the Prime Minister elect is a business friendly face.

Moody's analyst Vikas Halan expects that the new BJP-led government will increase natural gas prices, which would benefit upstream oil & gas companies and provide greater long term incentives for investment. Gas prices were originally scheduled to almost double in April, but the previous government put that increase on hold because of the elections.

This delay has meant that India's upstream companies have been losing large amounts of revenue, and a timely increase in gas prices would therefore cushion revenues and help revive interest in offshore exploration.

"A strong majority government would also increase the likelihood of structural reform in India's ailing power sector. Closer co-ordination between the central and state governments on clearances for mega projects and land use, two proposals outlined in the BJP's manifesto, would address investment delays," Halan added.

The Oilholic agrees with Moody's interpretation of the impact of BJP's victory, and with majority of the Indian masses who gave the Congress party a right royal kick. However, one is sad to see an end to the political career of Dr Manmohan Singh, a good man surrounded by rotten eggheads.

Over a distinguished career, Singh served as the governor of the Reserve Bank of India, and latterly as the country's finance minister credited with liberalising and opening up of the economy. From winning the Adam Smith Prize as a Cambridge University man, to finding his place in Time magazine's 100 most influential people in the world, Singh – whose signature appears on an older series of Indian banknotes (see right) – has always been, and will always be held in high regard.

Still seeing this sad end to a glittering career, almost makes yours truly wish Dr Singh had never entered the murky world of mainstream Indian politics in the first place. Also proves another point, that almost all political careers end in tears.

Away from Indian politics, Libyan oilfields of El Sharara, El Feel and Wafa, having a potential output level 500,000 barrels per day, are pumping out the crude stuff once again. However, this blogger is nonplussed because (a) not sure how long this will last before the next flare up and (b) unless Ras Lanuf and Sidra ports see a complete normalisation of crude exports, the market would remain sceptical. We're a long way away from the latter.

A day after the Libyan news emerged on May 14, the Brent forward month futures contract for June due for expiry the next day actually extended gains for a second day to settle 95 cents higher at US$110.19 a barrel, its highest settlement since April 24.

The July Brent contract, which became the forward-month contract on May 16, rose 77 cents to settle at US$109.31 a barrel. That's market scepticism for you right there? Let's face it; we have to contend with the Libyan risk remaining priced in for some time yet.

Just before taking your leave, a couple of very interesting articles to flag-up for you all. First off, here is Alan R. Elliott's brilliant piece in the Investor’s Business Daily comparing and contrasting fortunes of the WTI versus the LLS (Louisiana Light Sweet), and the whole waterborne crude pricing contrast Stateside.

Secondly, Claudia Cattaneo, a business columnist at The National Post, writes about UK political figures' recent visit to Canada and notes that if the Americans aren't increasing their take-up of Canada's energy resources, the British 'maybe' coming. Indeed, watch this space. That's all for the moment folks! Keep reading, keep it 'crude'!