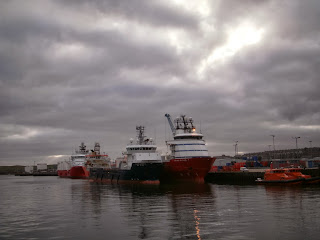 The Oilholic spent the wee hours of this morning counting the number of North Sea operational support ships docked in Aberdeen Harbour. Interestingly enough, of the nine in the harbour, six were on the Norwegian ships register.

Whether you examine offshore oil & gas activity in the Norwegian sector of the North Sea or the British sector, there is a sense here that the industry is enjoying something of a mini revival if not a full blown renaissance. As production peaked in the late 1990s, empirical evidence that oil majors had begun looking elsewhere for better yields started emerging. Some even openly claimed they’d given up.

Over a decade later, with new extraction techniques and enhanced hydrocarbon recovery mechanisms in vogue – a different set of players have arrived in town from Abu Dhabi National Energy Company (TAQA) to Austria's OMV, from Canada's Talisman Energy to China's Sinopec. Oil recovery from mature fields is now the talk of the town.

Even the old hands at BP, Shell and Statoil – who have divested portions of their North Sea holdings – seem to be optimistic. The reason can be found in the three figure price of Brent! Most commentators the Oilholic has spoken to here, including energy economists, taxation experts, financiers and one roughneck [with 27 years of experience under his belt] are firmly of the view that a US$100 per barrel price or above supports the current level of investment in mature fields.

One contact remarks that the ongoing prospection and work on mature fields can even take an oil price dip to around $90-level. "However, anything below that would make a few project directors nervous. Nonetheless, the connect with between Brent price fluctuation and long term planning is not as linear as is the case between investment in Canadian oil sands projects and the Western Canadian Select (WSC) price."

To put some context, the WSC was trading at a $30 per barrel discount to the WTI last time yours truly checked. Concurrently, Brent's premium to the WTI, though well below historic highs, is just shy of $10 per barrel. Another contact, who retains faith in the revival of the North Sea hypothesis, says it also bottles down to the UK's growing demand for natural gas.

"It's what'll keep West of Shetland prospection hot. Furthermore, and despite concern about capacity constraints, sound infrastructural support is there in the shape of the West of Shetland Pipeline (WOSP) which transports natural gas from three offshore fields in the area to Sullom Voe Terminal [operated by BP]."

While further hydrocarbon discoveries have been made atop what's already onstream, they are not yet in the process of being developed. That's partially down to prohibitive costs and partially down to concerns about WOSP's capacity. However, that's not dampening the enthusiasm in Aberdeen.

Five years ago, many predicted a rig and infrastructure decommissioning bonanza to be a revenue generator and become a thriving industry itself. "But enhanced oil recovery schemes keep pushing this 'bonanza' back for another day. This in itself bears testimony to what's afoot here," says one contact.

UK Chancellor George Osborne also appears to be listening. In his budget speech on March 20, he said that the government would enter into contracts with companies in the sector to provide "certainty" over tax relief measures. That has certainly cheered industry players in Aberdeen as well the lobby group Oil & Gas UK.

"The move by the Chancellor gives companies the certainty they need over the tax treatment of decommissioning. At no cost to the government, it will speed up asset sales and free up capital for companies to use for investment, extending the productive life of the UK Continental Shelf," a spokesperson says, echoing what many here have opined.

Osborne's budget speech also had one 'non-crude' bit of good news for the region. The Chancellor revealed that one of the two bidders for the UK government's £1 billion support programme for Carbon Capture and Storage (CC&S) is the Peterhead Project here in Aberdeenshire. Overall, the industry sounds optimistic, just don't mention the 'R-word'. Scotland is due to hold a referendum on September 18, 2014 on whether it wants to be independent or remain part of the United Kingdom. 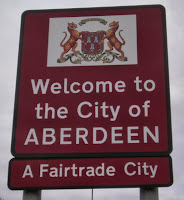 Hardly any contact in a position of authority wants to express his/her opinion on record with the description of political 'hot potato' attributed to the referendum issue by many. The response perhaps is understandable. It's an issue that is dividing colleagues and workforces throughout the length and breadth of Scotland.

General consensus among commentators seems to be that the industry would be better off in a 'United' Kingdom. However, even it were to become a 'Disunited' Kingdom come September 2014, industry veterans believe the global nature of the oil & gas business and the craving for hydrocarbons would imply that the sector itself need not be spooked too much about the result. National opinion polls suggest that most Scots currently prefer a United Kingdom, but also that a huge swathe of the population is as yet undecided and could be swayed either way.

In a bid to conduct an unscientific yet spirited opinion poll of unknown people since known ones were unwilling, the Oilholic quizzed three taxi drivers around town and four bus drivers at Union Square. Result – two were in the 'Yes to independence' camp, four were in the 'No' camp and one said he'd just about had enough of the 'ruddy question' being everywhere from newspapers to radio talk shows, to a stranger like yours truly asking him and that he couldn't give a damn!

Moving away from the politics and the projects to the crude oil price itself, where black gold has had quite a fortnight in the wake of a US political stalemate with regard to the country's debt ceiling. Nervousness about the shenanigans on Capitol Hill and the highest level of US crude oil inventories in a while have pushed WTI’s discount to Brent to its widest in nearly three months by this blogger's estimate.

Should the unthinkable happen and the political stalemate over the US debt ceiling not get resolved, it is the Oilholic's considered viewpoint that Brent is likely to receive much more support at $100-level than the WTI, should bearish trends grip the global commodities market. This blogger has maintained for a while that the WTI price still includes undue froth in any case, thereby making it much more vulnerable to bearish sentiment.

Just one final footnote, before calling it a day and sampling something brewed in Scotland – according to a recent note put out by the Worldwatch Institute, the global commodity 'supercycle' slowed down in 2012. In its latest Vital Signs Online trends report, the institute noted that global commodity prices dropped by 6% in 2012, a marked change from the dizzying growth during the commodities supercycle of 2002-12, when prices surged an average of 9.5% per annum, or 150% over the stated 10-year period.

Worldwatch Institute says that during the supercycle, the financial sector took advantage of the changing landscape, and the commodities market went from being "little more than a banking service as an input to trading" to a full-fledged asset class; an event that some would choose to describe as "assetization of commodities" and that most certainly includes black gold. Supercycle or not, there is no disguising the fact that large investment banks participate in both financial as well as commercial aspects of commodities trading (and will continue to do so).

Worldwatch Institute notes that at the turn of the century, total commodity assets under management came to just over $10 billion. By 2008 that number had increased to $160 billion, although $57 billion of that left the market that year during the global financial crisis. The decline was short-lived, however, and by the end of the third quarter in 2012, the total commodity assets under management had reached a staggering $439 billion.

Oil averaged $105 per barrel last year and a slowdown in overall commodity price growth was indeed notable, but Worldwatch Institute says it is still not clear if the so-called supercycle is completely over. That’s all for the moment folks! Keep reading, keep it ‘crude’!