Discussing Offshore, BP & all the rest on TV 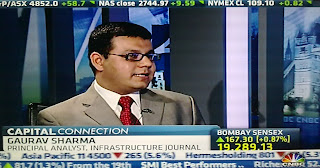 After researching the impact of BP’s disaster on offshore drilling stateside using Houston as a hub to criss-cross North America for almost a month, I published my findings in a report for Infrastructure Journal noting that both anecdotal and empirical evidence as well as industry data suggested no material alteration when it comes to offshore drilling activity. The reason is simple enough – the natural resource in question – crude oil has not lost its gloss. Consumption patterns have altered but there is no seismic shift; marginally plummeting demand in the West is being more than negated in the East.

So over a year on from Apr 20, 2010, on that infamous day when the Deepwater Horizon rig at the Macondo oil well in Gulf of Mexico exploded and oil spewed into the ocean for 87 days until it was sealed by BP on July 15, 2010, the oilholic safely observes that if there was a move away from offshore – its clearly not reflected in the data whether you rely on Smith bits, Baker Hughes or simply look at the offshore project finance figures of Infrastructure Journal.

er publication of my report on the infamous first anniversary of the incident, I commented on various networks, most notably CNBC (click to watch), that (a) while offshore took a temporary hit in the US, that did not affect offshore activity elsewhere, (b) no draconian knee-jerk laws were introduced though the much maligned US Minerals Management Service (MMS) was deservedly replaced by Bureau of Ocean Energy Management, Regulation and Enforcement (BOEMRE) and (c) Brazil is fast becoming the “go to destination” for offshore enthusiasts. Finally as I blogged earlier, the sentiment that BP is somehow giving up or is going to give up on the lucrative US market – serving the world biggest consumers of gasoline – is a load of nonsense!

So what has happened since then? Well we have much more scrutiny of the industry – not just in the US but elsewhere too. This increases what can be described as the diligence time load – i.e. simply put the legal compliance framework for offshore projects. Furthermore, without contingency plans and costly containment systems, the US government is highly unlikely to award offshore permits. So the vibe from Houston is that while the big players can take it; the Gulf may well be out of reach of smaller players.

Now just how deep is 'deepwater' drilling as the term is dropped around quite casually? According a Petrobras engineer with whom I sat down to discuss this over a beer – if we are talking ultra-deepwater drilling – then by average estimates one can hit the ocean floor at 7,000 feet, followed by 9800 feet of rock layer and another 7,000 feet of salt layer before the drillbit hits the deep-sea oil. This is no mean feat – its actually quite a few feet! Yet no one is in a mood to give-up according to financial and legal advisers and the sponsors they advise both here in London and across the pond in Houston.

To cite an example, on Oct 12, 2010 – President Obama lifted the moratorium on offshore drilling in the Gulf. By Oct 21, Chevron had announced its US$7.5 billion offshore investment plans there – a mere 9 days is all it took! Whom are we kidding? Offshore is not dead, it is not even wounded – we are just going to drill deeper and deeper. If the demand is there, the quest for supply will continue.

As for the players involved in Macondo, three of the five involved – BP, Anadarko Petroleum and Transocean – may be hit with severe monetary penalties, but Halliburton and Cameron International look less likely to be hit by long term financial impact.

How Transocean – which owned the Deepwater Horizon rig – manages is the biggest puzzle for me. Moody's currently maintains a negative outlook on Transocean's current Baa3 rating. This makes borrowing for Transocean all that more expensive, but not impossible and perhaps explains its absence from the debt markets. How it will copes may be the most interesting sideshow.