There seem to be more backers of the theory that Brent is winning the crude battle of the indices. I certainly believe Brent provides a much better picture of the global oil markets over WTI. Back in May 2010, I blogged that David Peniket, President and COO of Intercontinental Exchange (ICE) Futures Europe, gave Brent his backing. SocGen joined the ever-growing chorus last week. In a note to clients, the French banking major noted that Brent is a much better barometer of the global oil markets, where both crude and product demand have been strong.
Regarding premium between Brent and WTI, SocGen analysts note: “First, preliminary Euroilstock data showed a 4.2 Mb crude stockdraw in December. When this month-on-month per cent change is applied to the end-November OECD Europe crude stock figures from the IEA, the result in end-December European crude stocks that are below average; this is in sharp contrast to the near-record high stocks at Cushing.”
Additionally, oil field technical problems have caused some supply losses in the North Sea and planned pipeline maintenance at the Gullfaks field, in Norway, was also announced last weekend. Moving away from the North Sea, news has emerged that Roseneft and ExxonMobil have penned a deal for oil and gas exploration in the Black Sea, though intricacies and value of the deal is as yet unknown. 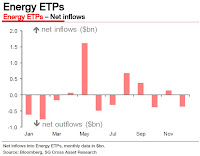 Finally, SocGen’s Mutual Fund & ETF report published last week makes for interesting reading; a sort of a continuation of trends noted by the wider market in general. It notes that the commodity rally was supported by US$23 billion inflows in 2010 (click on graphics to enlarge). Over the past 6 months, the rally in commodity prices has been significant (CRB index +27%) and directly associated with the expected pick-up in demand, but reallocation to protect against inflation has clearly played a role as well.

However, SocGen observed that Precious metals, and not energy, dominated commodity inflows. Precious metals were by far the largest category in commodity ETPs (including ETFs, ETCs and ETNs) accounting for 76% of US$157 billion assets under management and they continue to attract most of the inflows.